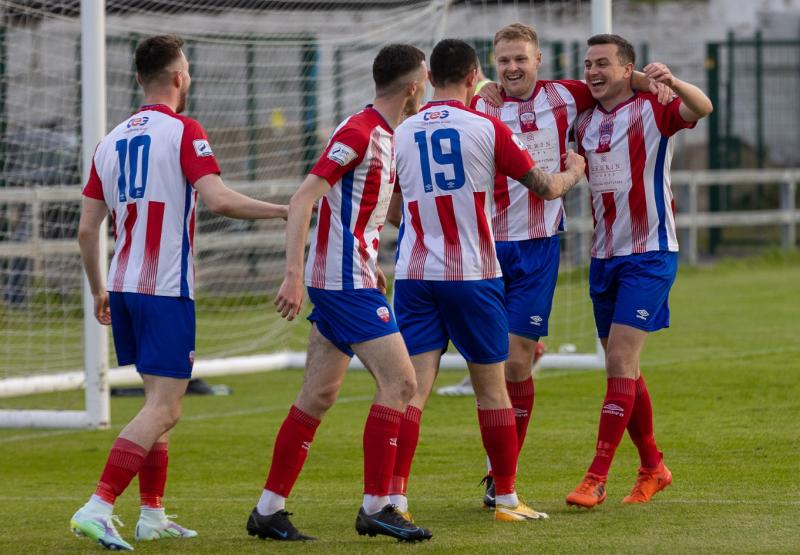 TREATY United ended their two game losing run in the SSE Airtricity League First Divison, but were left to rue what might have been after playing out a dramatic 2-2 draw with Bray Wanderers at the Markets Field on Friday night.

Twice the home side surrendered leads as visitors Bray fought back to earn a deserved share of the spoils.

Enda Curran had fired Treaty in front as early as the sixth minute, the striker notching his sixth goal of the league campaign.

Treaty could and should have been further ahead at the break and were made pay when Kieran Marty Waters netted a 60th minute equaliser for the visitors, who improved significantly in the second half.

Treaty looked to have secured all three points when captain Jack Lynch netted a smashing goal in the 78th minute. However, Pat Devlin's Bray side secured a deserved share of the spoils when Paul Fox stunned the home supporters seven minutes from time

Treaty United's crucial run of three home league fixtures in the First Division will see the Limerick-based side host Longford Town at the Markets Field on Monday night, 7.45pm, before hosting Cobh Ramblers at the Garryowen venue on Friday night next.

Josh Quinlivan and Fionn Doherty were named on the substitutes' bench for the home side's first league game in 11 days. Willie Armshaw was ruled out of the game due to an injury picked up in Monday night's Munster Senior Cup semi-final defeat to Cork City.

Treaty began the night two places and four points clear of Bray Wanderers in the First Division table prior to kick-off.

On a perfect night for a game, Treaty United created the first decent scoring opportunity as early as the sixth minute. Marc Ludden's pinpont cross from the right found Dean George, However, the striker's headed flashed over the crossbar.

Enda Curran then put the home side in front within two minutes when volleying home superbly from Joe Collins delightful cross. The goal was Collins' sixth of the season.

Treaty then had an opportunity to grab a second goal in the 26th minute when the alert Dean George latched onto a through ball. However, in trying to dink the ball past the advancing Bray 'keeper, the striker's effort flew over the crossbar.

The home side also came close to adding a second goal on the half hour mark as Treaty's front two continued to pose a huge threat to the Bray defence.

Curran seized on Dean Zambra's under hit back pass but his effort on goal failed to beat Bray keeper Kelly.

Treaty did have the ball in the net for a second time moments later. However, captain Jack Lynch was judged to have drifted offside prior to putting the ball into the net.

A minute before half-time, Bray created a chance of their own but Darragh Lynch's effort was saved by Treaty keeper Brady.

At the other end of the pitch, Enda Curran looked set to put Treaty two goals to the good when creating a decent opening with a delightful touch. However, the covering Conor McManus denied the home striker with a well-timed tackle.

Treaty maintained their 1-0 lead until half-time and were quickly on the front foot at the start of the second period.

Bray continued to pose a threat at the other end of the pitch and Ben Feeney forced a smart save from Jack Brady in the 54th minute.

And the home side were dealt another blow in the 60th minute when Lynch set up Kieran Marty Waters who fired Bray Wanderers level to stun the home supporters.

Pat Devlin's side could have taken the lead in the 66th minute, but Darragh Lynch's effort on goal was deflected out for a corner by Sean Guerins.

Treaty needed to respond and they did when Matt Keane crossed from the right, but Lee Devitt's header was saved by Bray netminder Kelly.

And the home side hit the front in spectacular fashion in the 78th minute. Substitute Conor Melody created the opening with a terrific pull back for the in-rushing Jack Lynch.

Treaty skipper Lynch controlled the ball superbly with a smashing first touch, before hammering the ball high into the net for the lead goal at 2-1.

Treaty's lead was short-lived however as an alert Paul Fox finished superbly after the home side failed to clear the danger five minutes after taking the lead.

Treaty did create an opportunity to grab a late winner, but Matt Keane, after showing great strength to burst through the Bray defence fired over.

Bray also had a last gasp chance to nick all three points, but Treaty managed to thwart them.