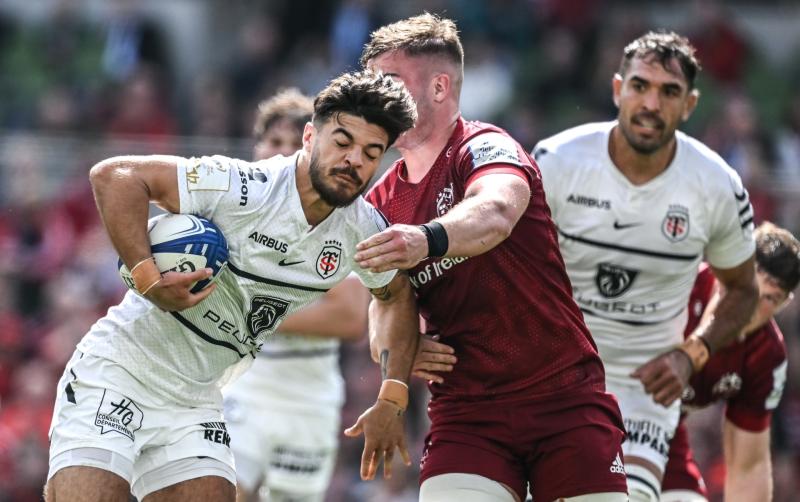 Munster Rugby have been beaten in the Champions Cup quarter final by Toulouse. The game was decided on a penalty shootout (12-6) following a 24-24 draw after extra time.

An opening try from Alex Kendellan got the men in red underway, before Toulouse replied almost instantly with Romain Ntamack crossing the white wash.

Munster looked in more trouble after 26 minutes when Libel crossed in the corner untouched following a dominant French scrum. With the game at 14-7 to the champions, the red army, over 30,000 of them, roared their side back into the game and the 50/50 aerial battles went Munster's way. With a foothold in the game, good 22 pressure lead to a try from Keith Earls. The Limerick man crossing untouched into the right corner of the Aviva. Carbery added the extras to make it 14-14 at the short whistle.

The second half was all Munster for the opening 17 minutes. Mike Haley crossed for his side's third try, following an excellent line break from Chris Farrell. With the score now at 21-14, Munster were also ahead in terms of players on the pitch. Second row Rory Arnold was sin binned for a late and dangerous tackle on Simon Zebo.

With that advantage Munster made the most of it and Joey Carbery added a penalty to send his side 24-14 in front after 57 minutes. That would be Munster's last score of the game. The five time and reigning champions seemed to claw their way back into the tie, adding another Libel try, making it three tries apiece and 24-21.

With time running out, Toulouse once more used their scrum dominance to claim one more shot at goal, with Ramos the hero, levelling the sides 24-24 after 69 minutes.

The drama was only beginning. With the clock in the red, Munster's Ben Healy had a kick at goal, all be it from 57 metres out, to win the game. As his kick sailed left and wide, the game was sent into extra time.

The two, ten minute periods of extra time, were a kicking fest, with both sides afraid to play. Both sides had opportunities to kick game winning drop goals but neither could seal a sensational win.

To penalties we went. The kicks were taken from straight in front, on the meeting of the 15 and 22 (left and right) by Conor Murray, Ben Healy and Joey Carbery for Munster, while Thomas Ramos, Antoine Dupont and Romain Ntamack were the kickers for Toulouse.

The champions did not miss a kick, while Conor Murray missed his second kick and Ben Healy missed both.

Toulouse move on to play the winners of Leinster and Leicester, while Munster return to the Aviva Stadium on May 21 to take on Leinster in the final round of the URC.