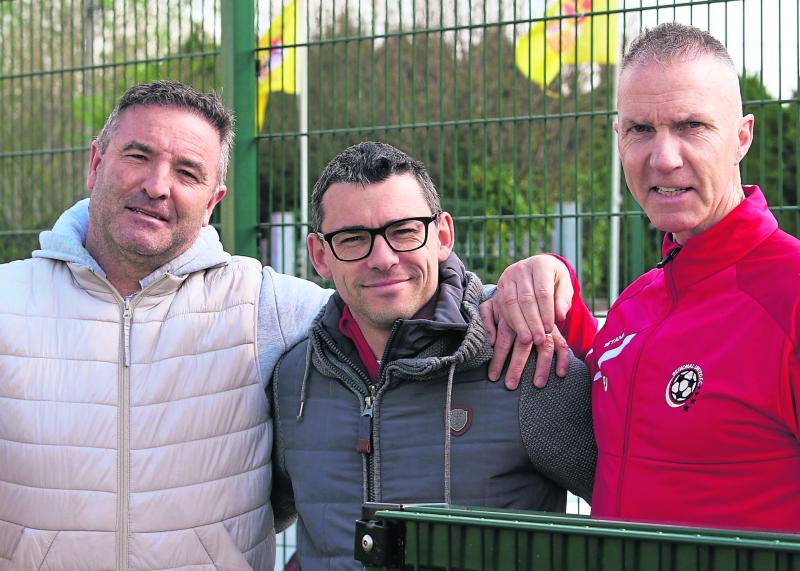 Declan Considine, Ray Jordan and Mike Reidy, at the meeting of Aisling Annacotty and Regional Utd in the Premier League in Annacotty on Sunday Pic: Brendan Gleeson

ALL eyes in local soccer will be on Pike Rvs this weekend when they travel to the Capital to play Oliver Bond Celtic in the semi-final of the FAI Junior Cup.

Pike had good preparation for the tie last weekend when they defeated senior side Everton from Cork in the FAI Senior Cup.
Pike went about their business efficiently and were well deserving winners on the day.

The deployment of player manager Robbie Williams in front of the back four has been a master stroke by the Hoops. His reading of the game is second to none and his delivery helps to utilize his speedy front runners.

Oliver Bond Celtic ply their trade in the Leinster Senior League where they top the Saturday Major league by one point.
They recorded a 4-1 win over Leicester last Friday evening which will have them in good form going into Sunday’s clash.

It is the second time the Dublin side will play Limerick opposition this season, having narrowly beaten Ballynanty Rvs earlier in the competition.

After a couple of near misses over the last few years, Pike are determined to make amends this season and if they perform to their ability, they should fear nobody.

In the Premier League Fairview Rgs can open a six-point lead if they can take full points at home to Aisling Annacotty. By their own admission, Fairview got out of jail when beating Nenagh 2-1 last weekend. A last-minute controversial penalty kick falling in their favour to decide the tie.

They will need a better showing against a well capable Aisling side who have a Lawson Cup semi final upcoming to keep them focussed.

Any slip ups by the leaders will be welcomed by the chasing pair of Pike and Balla.

The latter travel to take on Nenagh AFC knowing any slip up could end their hopes of taking the title. In the Premier League (Bottom Six), leaders Mungret Reg take on relegation threatened Kilmallock, while closest challengers, Janesboro travel to Coonagh Utd.

In the Premier A League, leaders Carew Park will be expected to keep their charge on track at home to Murroe while Charleville, hoping for a Carew slip up, travel to Corbally Utd.

In Division 1A, leaders Hyde Rgs A host Ballylanders but it is Granville who are favourites to take the title with games in hand. They host Summerville Rvs in Glenbrook.

In the Divisional Cups are down to the last four. Mungret Reg and Regional Utd B clash in a local derby and Caledonians take on a resurgent Glenview Rvs.

It’s also semi final time in the Division 2B Cup. Newport C meet Lisnagry A in a local battle while Shelbourne B welcome Nenagh B.

Midweek action this week sees the kick off of the Divisional Cup finals.

On Friday the Div 3B Cup Final finds Ballynanty Rvs B attempting to complete the League and Cup double when they take on Knockainey B.
Ballynanty Rvs B runaway league champions have a slew of players who are well used to playing finals in Jackman Park. Knockainey go into the tie more in hope than anticipation but will not be found lacking for effort.