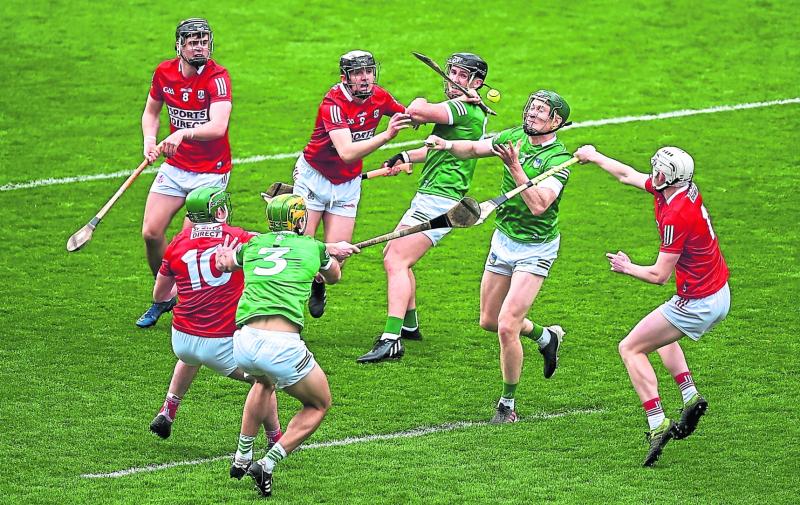 Limerick's William O'Donoghue in action against Shane Barrett, right, of Cork during the Munster SHC first round fixture at Páirc Uí Chaoimh on Sunday last

THINK it’s all fair to say that whether the Limerick supporters travelled down to the Lee side or watched it on the box, there was definitely a sense of the unknown.

After Limerick’s lacklustre league campaign, it was extremely hard to gauge where the team was at. I would have no problem in putting my neck on the block by saying that we have the best management team in the country, and I for one was fully sure that they would have the side spot on.

A word that has been used in the last number of weeks and months was ‘hunger’.

Anthony Daly asked a question ‘were their stomachs full?’ And many others wondered if they were going to have the same grá that they had for the last number of years.

I can’t say this for certain, but Limerick scoring 2-16 from turnovers has surely got to be up there with the highest, and if I look at no other statistic from the game, that alone tells me exactly where their hunger is.

In saying all that, I still don’t think we can truly judge Limerick on Sunday’s performance, as Cork were extremely disappointing. I have no idea how Cork consistently try the same game style over and over again, and expect different results.

On top of that, it baffles me how they didn’t try to ruffle a few feathers like they did in this years league game against Limerick. Prime example is, on numerous occasions, they allowed Nicky Quaid to hit a short puck out to any one of the full back line, who could then transition to the half back line, then to mid field, who could deliver into the full forward line and get a shot away with not a finger being touched on any one of those players.

At times, I didn’t know which goals Cork were playing into, as they seemed to go backwards as much as forwards. Now the one thing that Cork are very good at is their running game.

So what did Limerick do? They ensured that wasn’t the case.

On the rare occasion when Cork did turn the ball over and they were able to create the overlap, they did create some good chances.

I thought the Limerick management team had their tactics spot on. Knowing Cork’s strong point is building the play and running off the shoulder, Limerick ensured Cork hit long ball.

When the Cork goalkeeper or full back line had the ball in open play, Limerick pushed hard on their men which meant there was no out ball, which in turn, forced the Rebels out of their game plan.

When they did hit long ball, it was down on top of Dan Morrissey, Declan Hannon and Diarmuid Byrnes, and that’s exactly what John Kiely would have wanted.

Much talk over the last number of months has been whether or not Kyle Hayes would be pushed further up the field.

I would have seen him at midfield or even centre forward, but I didn’t see him going into the edge of the square. You could say he had one of his quieter games, but still caused wreck, showing his pace, power and directness to rattle the onion sack in the first half.

While Aaron Gillane will be noted in the history books for the goal he scored, it came from the turnover of the Limerick forwards, including Kyle who popped the ball into him with Aaron hardly believing the space that he had.

It was great to see Cathal O’Neill make his debut in championship hurling, and I would absolutely echo John’s comments in the aftermath of the game, saying how much of a joke it is that Cathal now misses the rest of the U20 campaign.

It really does baffle me who comes up with these rules and regulations. And I have yet to hear a single person that would agree with the rule.

Attention now firmly turns to this Saturday night in the TUS Gaelic Grounds, where Limerick welcome the Déise to town. Honestly, I really am a huge fan of this Waterford team.

I think it’s now or never for Liam Cahill’s men because, while the last two years they have had plenty of excuses, e.g. injuries, five weeks on the bounce, etc, they have none this year.

I don’t think it’s going to be the only time they’re going to meet Limerick this year, but in saying that, both teams will want to get a result this weekend.

It’s a game that I’ve been waiting for, for a while, and I am looking forward to walking down the Ennis Road and soaking up the atmosphere.

Hopefully it will be a great evening for the Limerick hurlers and indeed an exciting atmosphere in the city of Limerick which has been badly missed over the last two years.