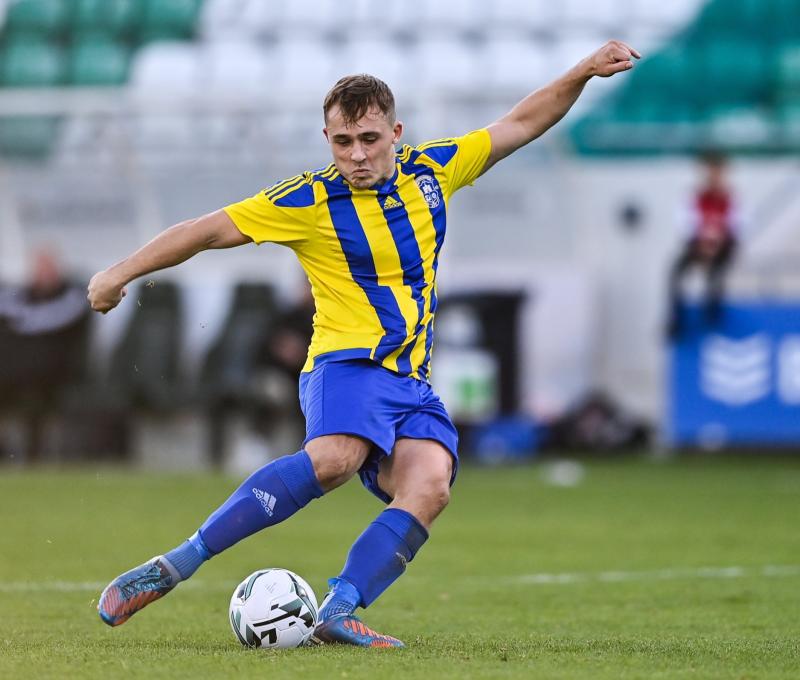 IN the Munster Junior Cup, holders Aisling Annacotty relinquished their grip on the trophy when they fell 3-1 away to St Michaels.

The Tipperary side took the lead through David Slattery but Shane Clarke scored to level up the tie.

Ed O'Dwyer restored Saints lead and a third goal courtesy of Shane Ryan secured the win for the home side.

FAIRVIEW Rgs had no such trouble as they eased into the semi finals of the provincial tournament with a 3-0 win over county neighbours Broadford.

The Desmond League were a game outfit, competing for everything but Fairview’s experience proved too much for them.

After the break, Conor Coughlan tacked on a third to put a gloss on the scoreline.

PIKE Rvs made it full points from their two games this week which propels them back to the top of the table, three points ahead of Fairview albeit with a couple of game extra played.

On Sunday they met a Ballynanty Rvs side who battled their way back into contention following a superb run.

However, they could find no way past an experienced Pike side who wrapped up the points with a brace of second half goals.

It was a closely fought game with defences well on top. Robbie Williams, deployed in front of the back four, was superb constantly breaking up Balla’s approach play before it reached his defenders.

That said, it was Balla who went closest to opening the scoring in the first half when Conor Ellis’ header struck the upright with Gary Neville scrambling across his line.

Ellis had a good chance at the start of the second half but Neville made a super save to keep it scoreless.

Pike broke the deadlock from a set play when Paddy O’Malley’s inswinging corner kick was flicked on by Steve McGann and Williams got the final touch to put it over the line.

Balla went within a whisker of levelling up the game when Liam Brock pounced on a headed clearance but his volley from outside the box smashed off the crossbar to safety.

Pike added the crucial second following some neat footwork in a crowded space. Conor Layng flicked on for McGann and his lay off was picked up by Colm Walsh O’Loughlin who took the ball wide of his marker to fire back across goal into the far corner.

Balla continued to press but with Adam Lipper dominant at the back and Williams continuing to protect, they could find no way through.

In the lower tier of the Premier League, Janesboro moved to within a point of leaders Mungret (with the sides still to play each other) when they beat Prospect 2-1.

The race for the Premier A league title took a huge shift on Saturday evening when leaders Charleville were knocked into thid place when Fairview Rgs leapfrogged them with a superb 2-1 win. Craig Madigan and Zak Sheehan scored for the View. Shane Dillon replied for Charleville.

Carew Park took full advantage of Charleville’s woes to move top of the table following a 3-1 win at Athlunkard Villa. Danny McCarthy and a brace from Mark McGrath gave Carew the spoils.

In the Division 1A Cup Patrickswell qualified for the semi finals with a 3-2 win over Star Rvs. Sean O'Brien, Lee Carey and Mark Griffin accounted for the winning scores while Adam McInerney and Alex Purcell replied for Rovers.

Knockainey also reached the semi finals thanks to a 2-1 win over Ballylanders.

John Tierney rolled back the years to play a starring role for the winners also netting both goals. Cathal Shanahan netted for Ballylanders.

The Division 2B Cup produced a thriller when Newport C pipped league leaders Aisling D in a fifteen-goal game. With the sides tied at 6-6 at 90 minutes, the spectators were treated to a further three goals in extra time before the Tipperary side advanced.

Jay Ryan turned in an amazing performance for the winners bagging six goals. A Jordan Clancy brace made up the tally.

Kieran O'Brien scored the only goal of the game in a win over Mungret Reg C while Dean Kerley scored for Dromore Celtic but they were pipped by Lisnagry A in extra time thanks to scores from Lee Park and Liam King.

James McInerney scored for Coonagh Utd B but they went down 3-1 to Shelbourne B who had scorers in Martin Wallace (2) and Mark Tuite.

In Youth Division One, Aisling Annacotty earned some revenge for their Ger Ryan loss when they beat Fairview Rgs to open up an 11-point gap at the top of the table. Richkov Boevi, Mike Curran and Evan Barry scored for the winners. Sean Whelan replied.

Goals by Ben McNamara (2), Luke Carmody, Eoin McGurran and Ola Olitelwa helped Parkville to a 5-1 win over Aisling Annacotty B.

Newport beat Regional Utd B with scores from Shane O’Halloran 3 and Dan Toriola.

In the Under 17 Cup there were wins for Fairview Rgs and Caherdavin over Shelbourne and Aisling respectively.

Nathan O'Shea, Ben O'Shaughnessy and Calum O'Connell were on the mark for Caherdavin in a 3-1 victory over Aisling.

Herbertstown reached the final of their cup with a 3-2 win over Corbally. Declan Heavey, Evan McCarthy and Niall Martin scored the winning goals.