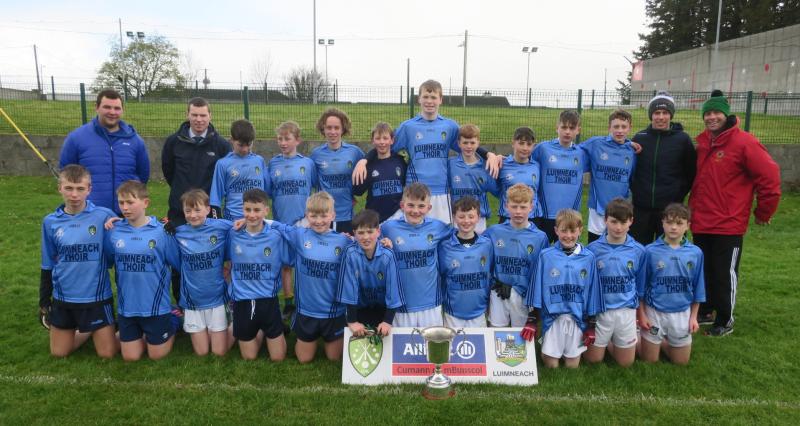 The East Limerick squad which won the Sarsfield Cup at Bruff

THE boys' footballers of East Limerick pulled off a rare feat when they achieved a double in Bruff GAA club recently by winning the Sarsfield Cup just a week after capturing the Mackey Cup.

Eat Limerick started the final impressively and Cormac Ryan had a point from play to get his team off the mark. Danann Glynn and Oisín Kennedy tacked on further points but South Limerick responded when, after a flurry of shots, Kevin Kearns rifled a shot to the net. The East added two more points and South closed the half with a point from Cillian Murphy.

A flurry of hailstones during the half time interval did not dampen the enthusiasm of players or spectators. Kevin McNamara scored a fine goal for East Limerick but, almost immediately South Limerick responded with a goal from Conor O’Mahony. East Limerick were not daunted and they began to take control. Two goals one after the other saw them clinch victory although the South battled gamely to the end. It was a great display of football by both sides who were well coached.

After the final, Joe Lyons, Chairman of Allianz Cumann na mBunscol Luimnigh presented the Sarsfield Cup to Ewan Coulter of Lisnagry NS, captain of East Limerick. He praised the efforts of all four Divisional teams and said that the standard of football augurs well for the future of Limerick football. He also thanked referee Cyril Doolan who did an excellent job.

South Limerick had reached the final by virtue of a comprehensive victory over Limerick City in Martinstown on a scoreline of 2-8 to 1-3.