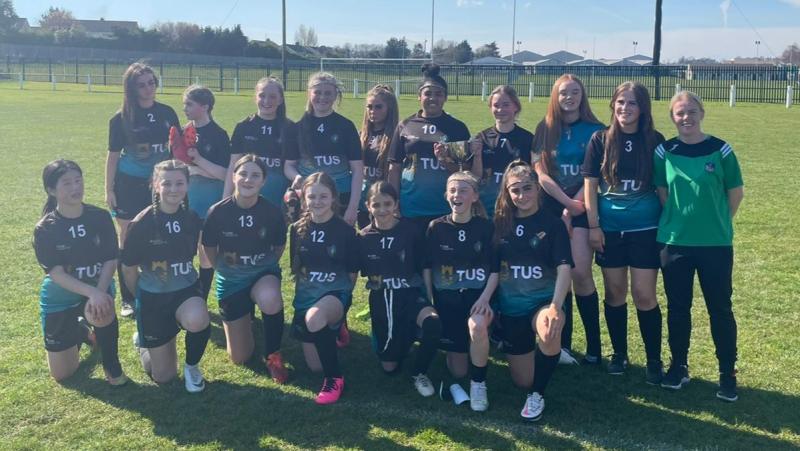 The contest sparked into life from the kick-off with Thomond’s captain fantastic Abbie Awaye bursting the net for the game’s opening goal. Carrigtwohill responded immediately afterwards, scoring two goals in quick succession with their second coming from the penalty spot.

Trailing by a goal midway through the first half Amy Crawford, drew the sides level, scoring a superb goal in the bottom left-hand corner of the net. With the sides deadlocked at 2-2, Carrigtwohill took full advantage of some poor defending by Thomond, to put them in the lead again at the half time whistle, 3-2.

In the second half, Thomond were first out of the blocks with the industrious Abbie Awaye leveling the sides once again at 3-3.

With their never-say-die attitude, Carrigtwohill again responded in typical fashion scoring their fourth goal. In what was turning out to be a real ding-dong battle, Thomond managed to shift momentum in their favour midway through the second half.

Abbie Awaye was now central in Thomond’s attack and following some excellent interplay with her midfielders, Abbie rattled the net again to earn herself an impressive hat trick of goals. With the sides level once again, the final ten minutes were very intense. Both teams were pressing forward in search of the winner.

It was not until the 88th minute that the result was decided, when Thomond found a gap in the Carrigtwohill defence to score an outstanding match-winning goal.

It was a fitting end to a trilling game that had everything. While Carrigtwohill will be disappointed, they can be very proud of their display. They were very unlucky considering they scored four exquisite goals.

However, it was Thomond’s day in the sun and were fully deserving of their victory. The team played exceptionally well on the day and showed some real class, particularly up front.

It was a memorable day out for Thomond and the large band of supporters who travelled to the match. Big congratulation to Thomond Community College on claiming the title of U14 Munster Champions.