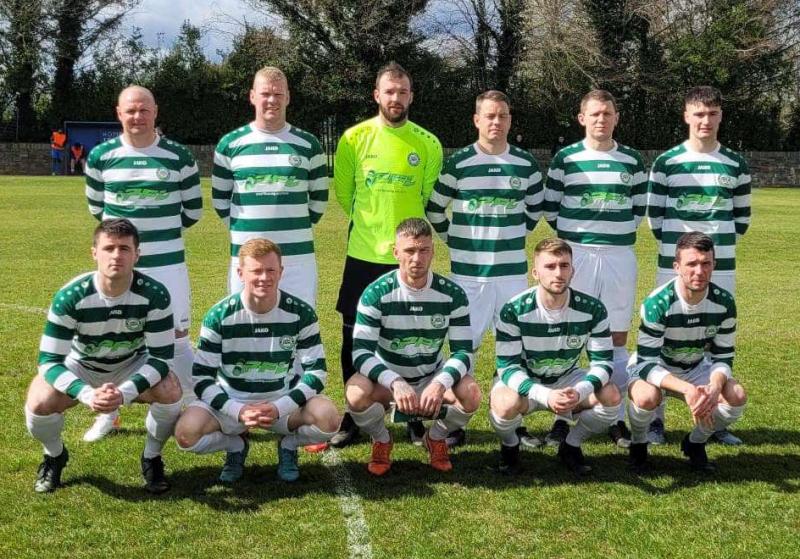 PIKE Rovers continue to carry the Limerick flag in the FAI Junior Cup after a superb 2-1 win at Hibernian FC on Saturday confirmed their place in the semi-finals of this year's competition.

There are many who think the FAI Junior Cup is due a stint on Suirside and the Waterford side bought into that narrative, taking the field full on confidence.

However, they came up against a dogged Pike Rvs XI who stuck to their plan and got their reward albeit in the final minute of extra time.

Pike player-manager Robbie Williams scored only his second goal of the season but it was a priceless one to put the Hoops in front.

As expected, the home side did not give up without a fight and got back on level terms with time nearly up in ninety minutes.
Extra time followed and when penalties looked on the cards, Colin Daly came up trumps to head home Aaron Murphy’s cross to the delight of the large Pike support.

The first half brought very few chances, as both teams cancelled each other out.

Pike had a number of inviting balls across the 6-yard box but just eluded their attackers.

The home side also had their spell in the ascendency but whenever closed in on the Pike goals, Pike’s defence marshalled superbly by the experienced Pat Mullins stepped in to protect keeper Gary Neville.

The second half saw pike up the tempo and they nearly scored from the restart as Williams picked out Patterson over the top but the wide man couldn’t get his shot on target. Pike opened the scoring minutes later. A superb set piece routine saw Wayne O’Donovan’s corner kick fall to the inrunning Williams who volleyed into the back of the net.

The home side went chasing an equaliser but with Mullins, Adam Lipper and Williams mopping up everything that came their way, it looked like the Hoops would hold out. However, from a long throw the ball fell to Nathan Brennan who hit a beauty that rocketed into the top corner giving Neville no chance whatsoever.

Despite the disappointment of conceding so late, Pike took the game to their opponents in extra time with Williams sitting in front of the back four, pinging balls like a quarterback to Murphy and Layng on the wings trying to create an opening.
The home side were replying on their pace to try to snatch a breakaway goal but time and again Mullins’ superb reading of the game thwarted the danger.

While most in the ground had settled on the idea of penalties. Pike had one more ace to play. In the final move of the game Williams again sent a ball down the left to Murphy who showed great skill beating two defenders at the byline. He curled a ball into the area which looked goal bound and Colin Daly made sure the ball crossed the line much to the delight of the big Pike fans.

Pike will be on the road again in the semi-final where they will meet Dublin side Oliver Bond Celtic. Another reward is Pike’s inclusion in the hat for the draw for the FAI Senior Cup.