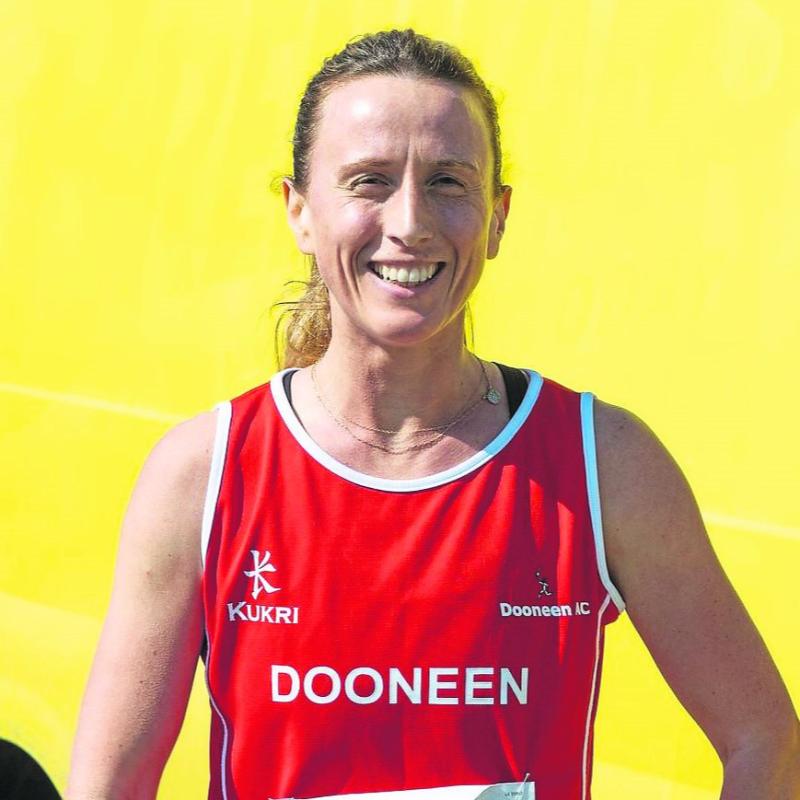 TAKING place for the second time in just over 6 months, West Limerick AC hosted the Limerick County Road Championships in splendid conditions in Dromcollogher. The final uphill stretch to the square was removed and made for a fast run in to the finish line.

First up was the Ladies race where first time competing Claire Coleman (Dooneen AC) dominated to win in 26:12. Clubmate Sinéad McDermott was second in 26:48 with Dooneen newcomer Éadaoin Hennessy taking the Bronze Medal on 27:04.

Ita O’Connor, running with Parkinsons Disease was a popular F60 winner in 43:15.

In the Men’s race, Niall Shanahan (An Brú) pulled away from Declan Moore in the final mile, to retain his title in 20:23.
Declan Moore had been level with Shanahan at halfway before eventually having to settle for second in 20:46. There was a sprint finish for the final podium position with Paul Fitzgerald (Limerick AC) eventually edging it on 21:19 from Niall O’Callaghan (West Limerick) on 21:20. 5th Declan Guina 21:31, 6th Karl Lenihan 21:44, West Limerick (4,5,6,8) took team victory on 23pts from Limerick AC on 29.

The Munster Juvenile Indoor athletics season drew to a close last weekend with the hosting of the Munster u9 – u11 championships at Nenagh. An Bru, Dooneen, Limerick AC and West Limerick AC were well represented and to the fore.

The individual performance of the day came from Andrew Birmingham of Dooneen AC in the boys u10 recording double gold, winning both 60m and long jump. Jack Lynch Limerick AC was also a double medalist taking 3rd place in 60m and 500m.

Relays: Limerick AC boys were in top form taking 1st place in two very hotly contested U10 and U14 relays. Dooneen AC took silver in the girls U11 relay.