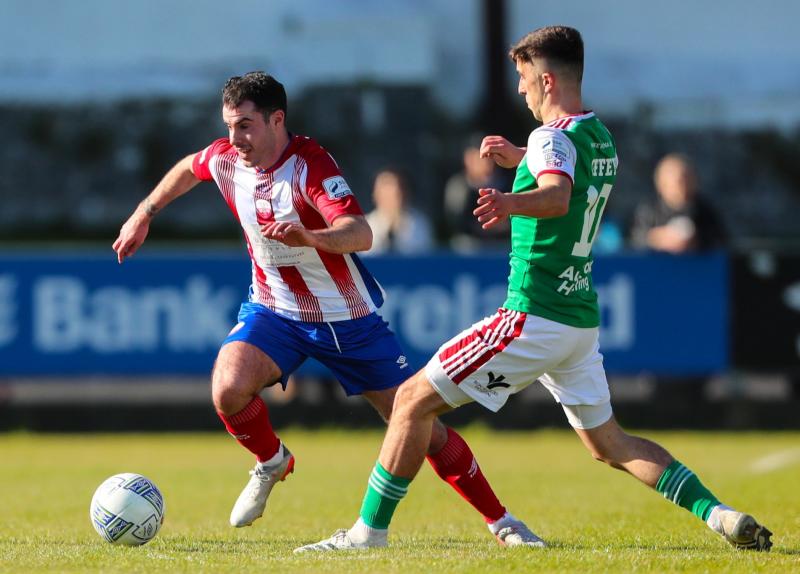 Joel Coustrain, of Treaty United, in action against Barry Coffey, of Cork City, during the SSE Airtricity League First Division fixture at the Markets Field on Friday last

TREATY United will look to end their two-game losing run in the SSE Airtricity League First Division when tackling Munster rivals Waterford FC at the Markets Field this Friday, 7.45pm.

Tommy Barrett's Treaty United side suffered a frustrating 4-0 defeat to in-form Munster rivals Cork City in their first home league fixture of the season at the Markets Field on Friday last.

The defeat came on the back of Treaty's 2-1 reverse at the hands of high-flying Galway United at Deacy Park on Monday night last.

Goals from Nenagh native Barry Coffey and a brace from Cian Bargary saw Cork City run out impressive winners at the Garryowen venue on Friday, with the result effectively confirmed by the break.

It was the first time that Treaty United lined out on the Markets Field pitch since their 3-0 promotion play-off defeat to UCD back in November.

City had led 3-0 at half-time. Afterwards Treaty United goalkeeper Jack Brady insisted the side is not as far off Cork City as the final scoreline from last Friday's meeting at the Markets Field may have suggested.

Jack Brady told Leader Sport: “It was massively disappointing. I think one of the things we have prided ourselves on is out-working other teams.

“Clearly today it just didn't happen for us at all, so even if we say, look, other teams might be full-time or they have top quality which Cork obviously did, that doesn't faze us usually because we pride ourselves on getting into their face and matching them work rate wise and then hopefully if we can keep it tight we might get a chance.

“I think what has really cost us over the past week has been the concession of early goals. We definitely need to look at it going forward into the next game.

“We need to keep it tighter for longer and avoid giving up opportunities early on.”

Treaty's opponents this Friday, Waterford FC, sit third in the First Division table after claiming three wins and a draw from their opening five league games.