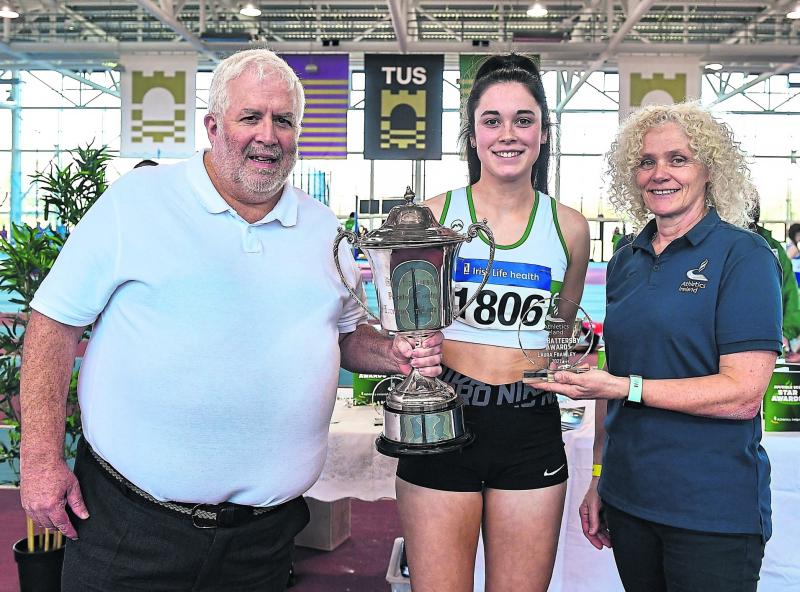 Congratulations to Sarah Lavin who finished seventh in the Final of the 60 metres Hurdles at the World Indoor Championships in Belgrade. She broke her pb twice en route, including 8.03 secs in her heat and 7.97 in the semi final before 8.09 in her third race of the day in the final. She is Ireland’s first World Indoor Finalist since 2010. Very well done Sarah!.

The National Juvenile Indoor Athletics Finals took place in Athlone IT this weekend. Two exciting days of competition included new championship best performance in many events (1500m,800m and Pole Vault). The competition was intense with close finishes the order of the day.

There were presentations of Special Star Awards to athletes who had outstanding performances in individual events. Laura Frawley, Emerald AC, was awarded the Bill Battersby trophy in recognition of her achievements in Long and Triple Jumps. Laura won Gold in High Jump and Silver in Long Jump this weekend.

Meabh Purtill took Bronze Medal in U15 Shot Putt with her sister Emer winning a Silver medal in U14. In the Boys U12 Ryle Bourke and Robert Purtill placed 4th and 5th. Gyte Andrijauskaite won Gold U12 Shot Putt.

The Wicklow Way Half marathon took place today which was used as a team Ireland selection race for the Trail du Guerledan in Brittany, France. John Kinsella came second and won one of the automatic selection place’s. The race will take place in June.

The Michal Rejmer 10 Mile takes place on 15th May from Limerick Racecourse.