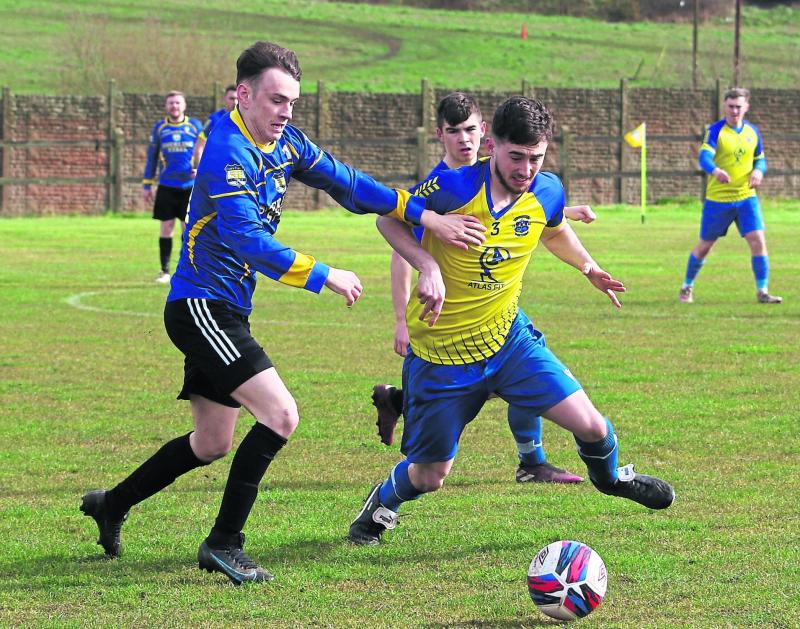 An injury hit Pike team bounced back from their midweek defeat to Fairview in the Tuohy Cup when they defeated Mungret Regional by a single goal in the Lawson Cup.

Man of the match Evan Patterson scored the only goal of a keenly contested tie.

The Hoops will be relieved rather than elated to see off a very determined Mungret XI.

In playing conditions that hindered both sides, Pike had the best of the possession in the opening half but a number of last-ditch tackles and blocks kept the game scoreless at the break.

The visitors broke the deadlock when Steven McGann and Colin Daly combined for the latter to glide into the box before cutting the ball back at the end line to Patterson who was waiting at the back post to tap in.

It was fitting that Patterson was the deciding factor as he worked his socks off on the day and the goal just topped off a superb performance.

Ironically, Evan’s brother Mark was equally impressive for the home side and he would have levelled on 70 minutes but for a fine save from 12 yards by Sean Hamm in the Pike goal.

Both teams had their spells in the second half but a combination of defence and wastage kept the deficit to a minimum.

On 75mins a well worked Mungret move and delivery from Sean Eskennagha fell to Conor Myers who struck just wide of the post.

For Pike, along with Patterson, Sean Hamm was excellent in goal. Darragh Carroll in midfield also caught the eye while player manager Robbie Williams marshalled the defence well topping it off with a goal saving block on Eskennagha.

Mungret have been on a good run of form and they will be glad they kept up that level on Sunday. Along with Mark Patterson, Sean Eskennagha had a fine outing as did Kian Barry who was a constant menace to the winners. Pike’s reward is a home tie with Moyross next weekend.

Premier league leaders Fairview Rangers followed up their impressive win over Pike Rvs in midweek by putting a gallant Hyde Rangers XI to the sword in the Lawson Cup on Sunday.

The sides met in the FAI Junior Cup earlier in the season when Fairview recorded a 9-3 win.

Hyde were hoping for a better showing this time out but a quick fire start by the Premier side left Hyde in their wake.

Veteran Paul Danaher added to the lead before Russell Quirke doubled his tally with the goal of the game.

Not dismayed by the hosts whirlwind start Hyde continued to attack and were rewarded with a well taken Ben Kennedy goal.

Eoin Duff and Evan Shine traded goals before the break to leave Fairview 5 2 up at the short whistle.

The hosts experience shone through in the second half with Duff, Danaher and Moloney all doubling their tallies before the finish.

Fairview will meet Athlunkard Villa in the next round.

Division 1A Side Shelbourne went close to causing a shock in the Lawson Cup when they were pipped on a penalty shoot-out by Athlunkard Villa.

Villa fought back and reduced the deficit on 40 minutes. Danny Taylor broke down the left wing chipped the ball to the far post, Mustafa Jaiteh missed an overhead kick but the ball broke to Ray Kerley who put the ball back in the danger zone and this time Mustafa made no mistake, volleying home.

The sides were level on 70 minutes when Christian Kerley picked out Darren Roche who moved the ball three yards to his left for the oncoming Donal O Doherty who fired across the goals to the far corner.

Neither side could find a breakthrough thereafter necessitating spot kicks to decide the issue when Villa proved more accurate on a 5-4 scoreline.

If you are going to get revenge, Carew Park showed how it should be done. Back in the first few weeks of the season, Carew suffered a 4-2 defeat to Fairview B when the Rangers youngsters played Carew off the park.

Well Albert Slattery ensured his side learned their lesson that day and nine wins in ten games since then suggests the result was a blessing in disguise.

On Sunday, Carew had the opportunity to gain revenge and they took it with both hands hitting six without reply to leapfrog their opponents into second spot.

Pat Boyle opened with a stunning long-range effort to put the home side ahead.

A foul on Adam Dore presented Gary Griffin with a spot kick which he duly converted.

Shortly after Griffin repeated the feat following a foul on Jamie O’Sullivan. The Carew defender went on to claim a rare hat trick when he headed in from O’Sullivan’s delivery to make it 4-0 at the break.

After the break O’Sullivan was the provider again as Mark McGrath made it 5-0 and the scoring was completed when Danny McCarthy latched onto James Slattery’s through ball to finish.

Janesboro B (off) Kilmallock B

Granville B (off) Coonagh Utd B

Mungret Reg C (off) Summerville B