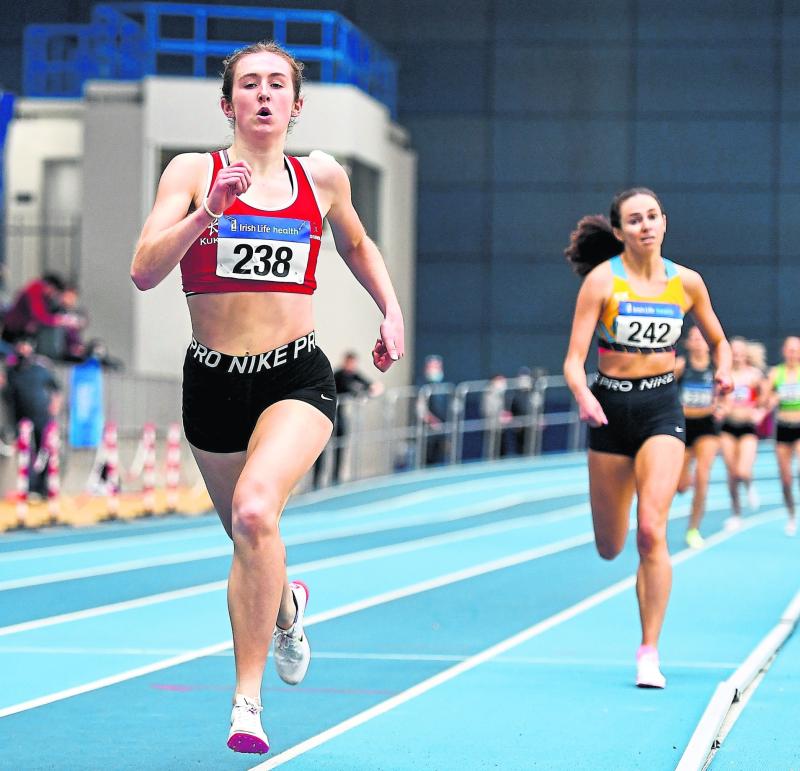 Sarah Hosey, of Dooneen AC, competing in the women's 800m during the AAI National Indoor Games & Indoor League Final at the National Indoor Arena at the Sport Ireland Campus

These Championships continued in Nenagh last weekend. Well done to all who took part.

GYTE Andrijauskaite (Dooneen) took 1st place in the Girls Shot Put. With a distance of 8.55m her throw was best by more than a metre. Dooneen also took Gold in the Boys U12 ‘Shot’ as Robert Purtill blitzed the opposition throwing 7.95m.

At U19, Laura Frawley (Emerald) took 1st place in the High Jump in 1.60m. The Dooneen duo of Sarah Hosey and Sarah Butler were 2nd and 3rd in the 800m. In the Boys competition Darragh Murphy (Limerick AC) was victorious in the 200m in 23:06 secs.

Around the Country and Abroad

John Kinsella had a fantastic victory in a time of 32:41 in the MMRA 8.5K Trail race in Rahan Woods just outside Mallow.
Gary Carroll and Mark Lenihan (both West Limerick) were 4th and 5th. Well done also to Máire O’Sullivan (Country Club AC) returning from injury who also took part.

Well done to all who took part in the 3 Limerick events as well as the Shelbourne Junior event.