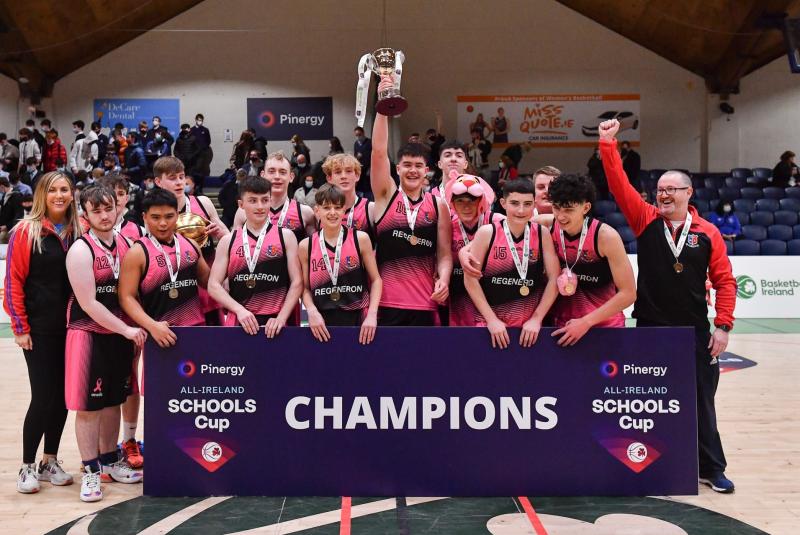 After winning the tip-off, St Munchin's lost possession, which Blackrock College capitalised on with a 3-point score from the left by Ronin O'Hallorin. St. Munchin's replied with their own three-pointer moments later, scored by captain Reece Barry.

O'Hallorin shot two more excellent threes from the same spot. A driving layup from Reece Barry, coupled with a free throw from Eoin Price, had St. Munchin's at a point behind, and when Liam Price rebounded his own shot with a layup in the final minute, it put St. Munchin's ahead by a point at the end of the quarter, 11-10.

The second quarter opened with a pair of converted free throws from Liam Price. Blackrock's Eric Brandt had an impressive block down on a three-point shot from Reece Barry, as he went for a three-pointer.

Eoin Price fed the ball out from the paint to Barry for a three, who repaid the favour when he assisted Liam Price later in the quarter for a three of his own. Liam Finn had a defensive rebound late in the quarter, which he fed to Liam Price for a driving layup.

A couple of three-pointers from Blackrock College's Ronin O'Hallorin kept their hopes alive, but the gap between the teams had extended to 12 as the half-time buzzer sounded, St Munchin’s ahead 34-22.

Our winners of the @Pinergy U19 B Schools Cup final, St. Munchin’s Limerick! #PinergySchoolsCup pic.twitter.com/nL8P9VVxhj

The third quarter started slowly, with both teams failing to make baskets. The first score of the quarter came 90 seconds in, when Liam Finn made a layup.

It was another 90 seconds before the next score, which came in the form of a three-point shot taken from the left of the D by Blackrock College's Patrick Morris. Hugo Kelly scored a layup late in the quarter to make it a ten-point game going into the final stretch, 43-33.

Reece Barry came out firing in the final quarter, notching his third three-pointer of the game. A driving layup 30 seconds later by Liam Price put St. Munchin's ahead by 15 points. Blackrock College attempted to close the gap with a couple of three-point shots of their own, but failed to make them.

Maitiú Heckmann made three free throws back-to-back, but buckets from Liam Finn and Patryk Rejkowicz negated his efforts. A pair of free throws slotted by Ronin O'Hallorin were the final scores of the game, making the end score 59-41 in St. Munchin's favour.

MVP was awarded to Liam Price after the game, following his 27-point performance.