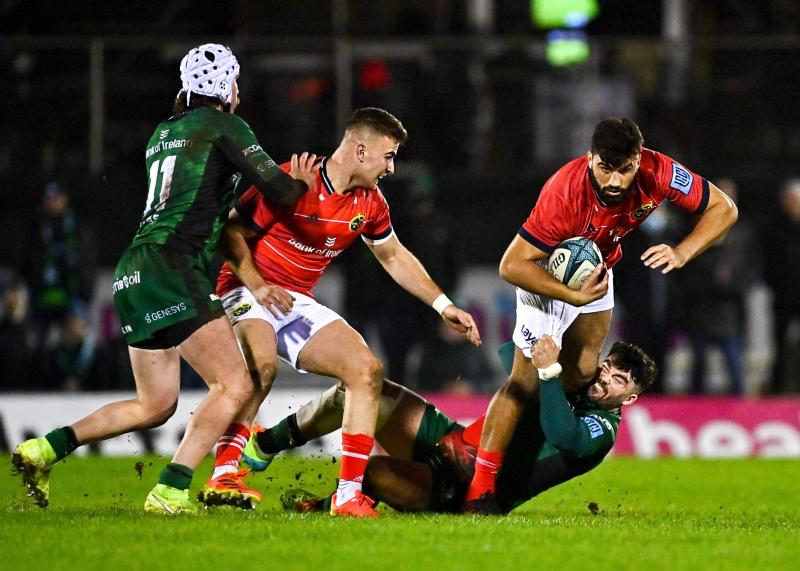 Munster centre Damian De Allende is tackled by Sammy Arnold, of Connacht, in their URC derby at the Sportsground in Galway on New Year's night

MUNSTER Rugby suffered a disappointing 10-8 defeat to Connacht in their United Rugby Championship interprovincial derby played in front of an attendance of 3,064 at the Sportsground on New Year Day.

It was a second defeat in this season's URC for Munster who were having their first outing in the competition for 10 weeks due to Covid19 issues.

Munster's poor discipline was a significant contributing factor in this defeat. The visitors lost two players to yellow cards and were penalised 17 times in a fixture that produced 29 penalties in total.

The key period of the game came just before half-time when a conservative Munster, who had an 8-3 and one-man advantage at that stage following the sin-binning of Connacht's Oisin Dowling, were camped on the Connacht tryline as the home side coughed up several penalties.

However, Munster failed to breach the stubborn Connacht defence and Johann van Graan's side ultimately retired to the changing rooms with just a five point advantage.

Those eight points were earned through a 16th minute penalty goal from Ben Healy and an opportunist try from Andrew Conway.

That score was created after Healy, who was  booted the ball upfield, before the out-half chased after his own kick and did superbly to charge the ball down from Mack Hansen's attempted clearance.

The ball spilled loose, with winger Daly poking it forward, before Conway pounced for a try.

Munster's five-point interval lead against a Connacht side, who had enjoyed the majority of the possession and territory for much of the half, seemed scant.

Healy and Connacht hooker Shane Delahunt were sin-binned following a dust-up between players as they headed to the dressing room for half-time.

Just before the end of the third quarter, Munster lost centre Chris Farrell to a yellow card for a high tackle on replacement Tom Farrell.

Connacht took full advantage, kicking the ball to the corner from the resultant penalty. The home side then claimed the line-out and mauled their way over the line with Aki dotting down.

Former Limerick minor hurler Conor Fitzgerald, introduced as a replacement in the opening half for Healy, then superbly slotted the match-winning conversion in the windy conditions to edge Connacht to victory.

It was no more than Connacht, who played with the greater ambition in attack, deserved as Munster had to make-do with taking a losing bonus point from the game.

Next up for Johann van Graan's charges is a home date with Ulster at Thomond Park on Saturday next, January 8 at 7.35pm.