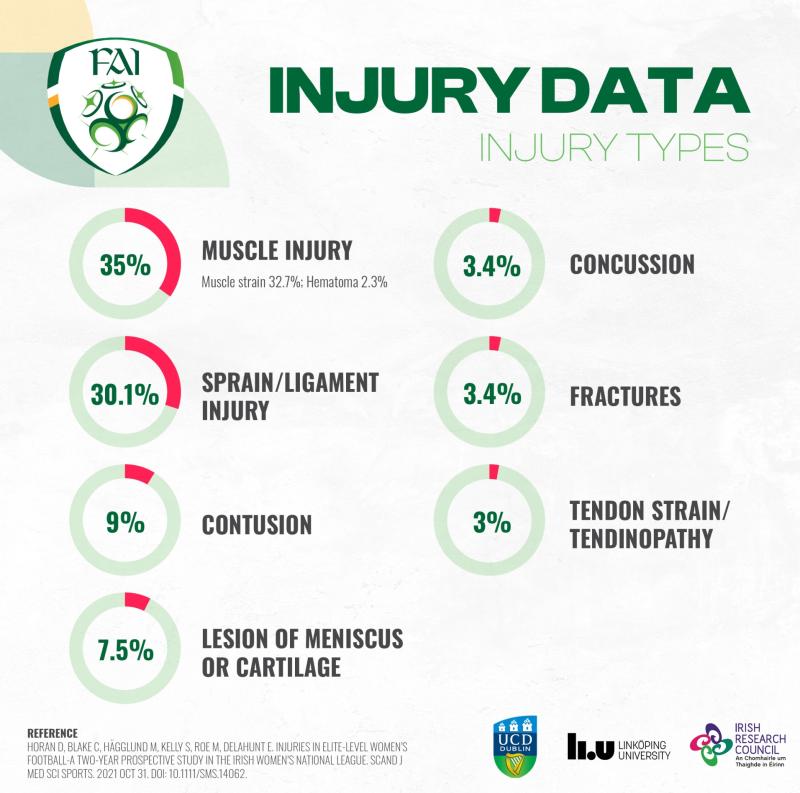 INJURY prevention for players in the SSE Airtricity Women's National League could be about to receive a massive boost following the findings of a detailed research project.

Dan Horan, Head of Research at the Football Association of Ireland, decided to take a closer look at this area for his PhD project and the results are incredibly insightful.

Under the supervision of Professor Eamonn Delahunt in UCD, Horan's study titled: ‘Game-changer! Injury surveillance in elite-level women’s football in Ireland: thinking bigger and working together’ is now available.

The study saw Horan work closely with seven of the eight clubs who participated in the Women's National League during the 2018 & 2019 seasons.

Muscle, ligament and contusion injuries were the most common injury types

Ankle, knee and thigh were the most commonly injured body sites

7.5 times higher risk of injury in a match than in training
Lower extremity injuries accounted for 85% of all injuries, of which, 46% had a non-contact injury mechanism

Horan and Professor Delahunt, an internationally renowned expert on injury and injury prevention with over 100 peer-reviewed publications, will use the findings from the research to introduce injury prevention modules to the Grassroots and UEFA Coach Education diploma courses currently being provided by the FAI.

Horan said: "With the support of the players, coaches and medical personnel in the Women's National League, we have been able to complete a comprehensive League-wide injury surveillance study. The results enable us to make comparisons to equivalent studies in other countries. This will allow us to design injury prevention modules within the FAI Coach Education pathway that will support coaches and their staff in protecting the health of players."

Co-author Dr Catherine Blake, Head of UCD School of Public Health, Physiotherapy and Sports Science, said: "UCD, with the support of the Irish Research Council, is delighted to be collaborating with the FAI on this important research exploring injuries in women's football in Ireland.

"As the first study of its kind to be conducted in Ireland, it will provide all stakeholders in the game with key insights that we hope will lead to the implementation of practical strategies to reduce the risk of injury in female footballers in Ireland and internationally."

Co-author Professor Martin Hägglund, Linköping University in Sweden, an international expert on injury epidemiology in women’s and men’s football said: "The protection of player’s health and welfare is central to all football governing bodies. This unique injury surveillance project in women’s elite football in Ireland will be crucial to inform injury risk mitigation strategies in the FAI and in the clubs.

"I am particularly happy that the project focuses on women’s football – an under-researched area – and impressed by the great response and investment from the FAI and the participating clubs and staff. Soft-tissue injuries, such as knee and ankle sprains and thigh muscle injuries, were the most burdensome for the clubs and should be a particular focus for preventive measures."