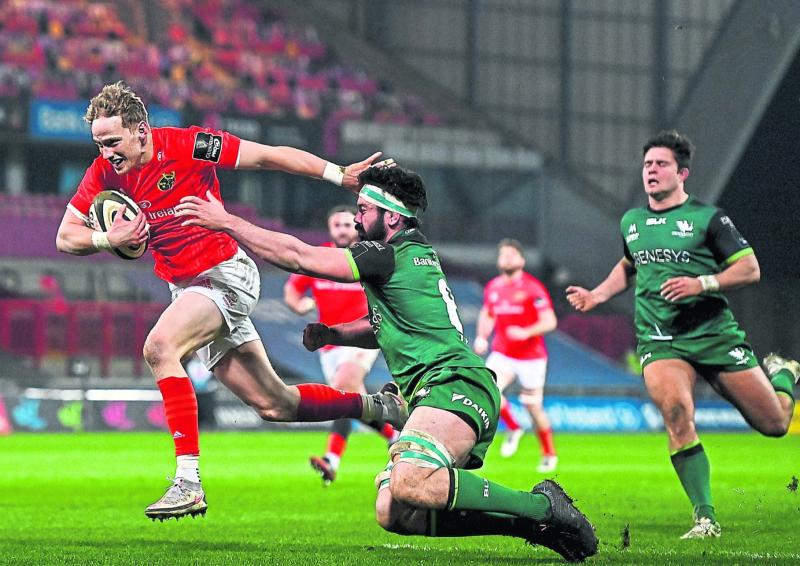 MUNSTER Rugby are set to resume their programme of fixtures in the United Rugby Championship with a derby meeting against Connacht at the Sportsground on New Year's Day, 5.15pm.

The Munster Rugby squad returned to the High Performance Centre in UL on Monday, for training ahead of the province’s Round 9 URC interpro with Connacht.

Munster’s scheduled St Stephen’s Day clash against Leinster at Thomond Park was postponed due to Covid-19 cases within the Leinster squad.

On a player movement front, Munster Rugby confirmed that hooker Declan Moore has linked up with Ulster Rugby for short-term injury cover.

Twenty five-year-old Moore, who is Irish-qualified, is a former Melbourne Rebels player, and joined Munster for the 2021/2022 season last summer.

He has featured for Shannon RFC in Division 1B of the Energia All-Ireland League this season and made his Munster debut off the bench in the province's recent Heineken Champions Cup victory away to Wasps.

Joey Carbery (elbow), Calvin Nash (ankle), Rowan Osborne (head), and RG Snyman (knee) continue to be managed by the Munster medical department and are not available for this weekend's clash with Connacht.

The Munster team to face Connacht is due to be named on Friday at 12noon.

Meanwhile, Munster senior coach Stephen Larkham admitted to being emotional when informing the squad members of his decision to leave the province next summer and return home to Australia.

Larkham said: “It’s the stage of my family as well and the ages of the girls. It was very difficult, it was emotional telling the boys. Everything was pretty rushed over in South Africa and I had to tell the boys at the end of training before we broke the news.

“It was emotional in the huddle, it was very difficult to get the words out. As I’ve said before, the environment is great here. The coaching set-up, the coaches, the staff, the facilities, the players. Everything is top notch.

“It’s going to be hard to replicate that going forward. So leaving all of that is difficult but I know I have done it for the right reason now. It’s still a very tough decision, it was back and forth and I struggled with it And even now there are pros and cons to it.”

The Munster players enjoyed a few extra days off over Christmas following the postponement of their scheduled St Stephen's Day fixture with Leinster in Limerick.

Larkham said: “It was good actually. We finished training on the Wednesday and then we had Thursday, Friday, Saturday, Sunday off, so a nice little break for the boys.

“We’ve had a few breaks, I guess, over the last month and a bit but that was nice to get the prep right around Christmas. Some of the boys travelled a fair distance to get home, other guys just prepped what they would normally do for Christmas Day, they prepped that a little bit earlier.”

The New Year's Day game with Connacht is live on TG4.