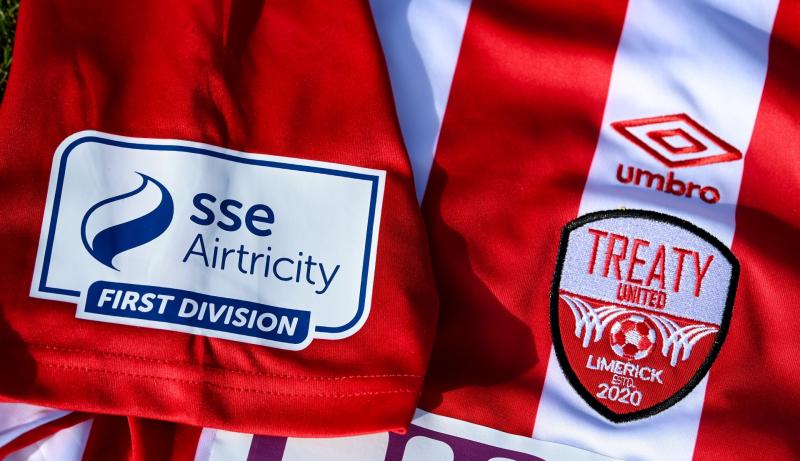 The SSE Airtricity League First Division fixtures have been released

TREATY United will kick-off their 2022 SSE Airtricity League First Division fixtures with an away date against Wexford FC.

The SSE Airtricity First Division 2022 season in the League of Ireland will kick-off on Friday, February 18 next with four rounds of fixtures across a 32-game calendar that will conclude on Friday, October 21 before the promotion/relegation play-offs.

In line with the SSE Airtricity Premier Division, the nine clubs will now play each other twice home and away.

The opening round of fixtures will also see Longford Town and Waterford FC begin life in the First Division at home to Cobh Ramblers and away to Athlone Town respectively. Bray Wanderers will host Cork City. Galway United will sit out the first weekend of fixtures and will begin their season away to Cork City on February 25. The League of Ireland season will close with the Extra.ie FAI Cup final on November 13.

Treaty United's first home league fixture will be against the Martin Russell-managed Athlone Town side at the Markets Field on Friday, February 25, before Tommy Barrett's charges travel to St Colman's Park to take on Cobh Ramblers on Friday, March 4.

Treaty then host Longford at the Markets Field on Friday, March 11, 7.45pm.

Speaking ahead of the publication of the fixtures, League of Ireland Director Mark Scanlon said: “The announcement of the fixtures for the new SSE Airtricity First Division is always a day of great excitement for the fans and all involved with our clubs.

“With nine teams on board for the 2022 season we sat down with the clubs, managers, players, PFA Ireland and our own National League committee before finalising this schedule. We look forward to a competitive and compelling First Division next season and I want to again thank SSE Airtricity for their continuing support of the League of Ireland.”

We start our @SSEAirtricityLg First Division campaign away to @WexfordFC on Friday, February 18th at 7:45PM.

We return to the Markets Field to host @AthloneTownAFC on Friday, February 25th at 7:45PM.

For the 2022 season, the nine-team format will see the SSE Airtricity First Division champions promoted automatically to the Premier Division with the sides finishing in second, third, fourth and fifth spots contesting a promotion/relegation play-off series alongside the team that finishes ninth in the Premier.

The First Division teams finishing second and fifth and the teams in third and fourth place will play each other in a two-legged play-off with the winners then contesting a one-legged final. The winner of this tie will then play the team that finishes ninth in the Premier Division to secure the final top flight spot for the 2023 season.

All SSE Airtricity First Division games will be available on LOITV next season with details of the service to be announced early in the new year. All fixtures are subject to clubs meeting the licensing criteria to participate in the League of Ireland.