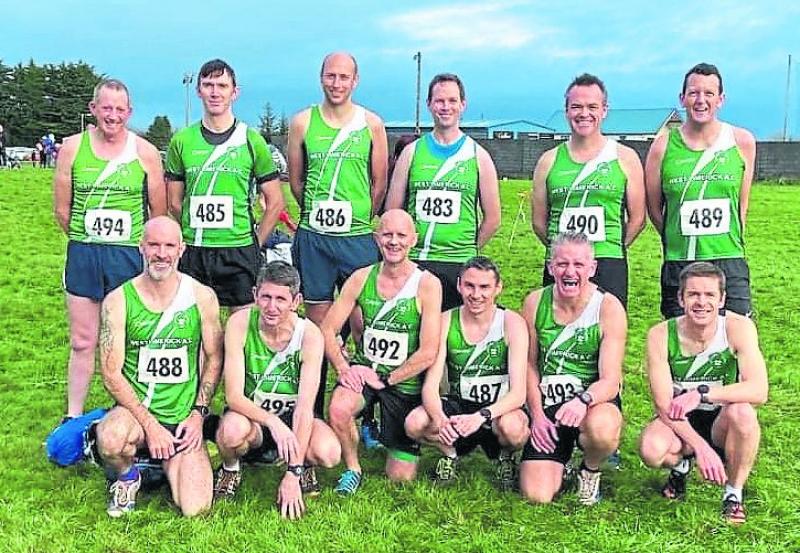 Munster Masters, Senior and Juvenile Relays Cross Country
THE Clarecastle course is relatively flat and conditions were good, but still heavy in places which served to slow athletes down.
Bilboa’s John Kinsella led until 800 metres from the finish when previous winner John Harty of East Cork stormed past taking victory in a time of 23:17 to Kinsella’s 23:31 . He was followed not far behind by Aogán MacDomhnaill of West Limerick in 11th overall and 3rd M35 in 25:31.

Tom Madden of the Country Club AC, who ran with Limerick AC and Redgate earlier in his career, took Gold in the M70. In the Women’s race the sole Limerick representative was Carmel Mac Domhnaill who finished 2nd F65 as well as 41st overall.
Juvenile Relays

Also at U10 a Limerick AC Girls U10 Team featuring Crea Moore, Zara Coman, Tabitha Carroll and Abi Hannafin were 8th from a field of 20. At U12 Limerick AC took the Bronze medal and their team included John Farrell, Marcel Flak, Darragh Whelan and Oisín Jennings. At U12 Tiyaa Coughlan, Fay Moore, Ciara McCarthy and Ava Murray were 12th for Limerick AC.

Community Games
The Community games Cross country and Mixed distance relays took place in a cold dry Navan last Saturday evening. Limerick were represented in U12 boys and girls.
The mixed U12 team came home with the gold while both girls and boys teams competed strongly. The U14 boys relay took bronze in a very tight finish.

Fixtures
The Border Half Marathon takes place next Sunday in Corbally and Clonlara, starting at 11am.