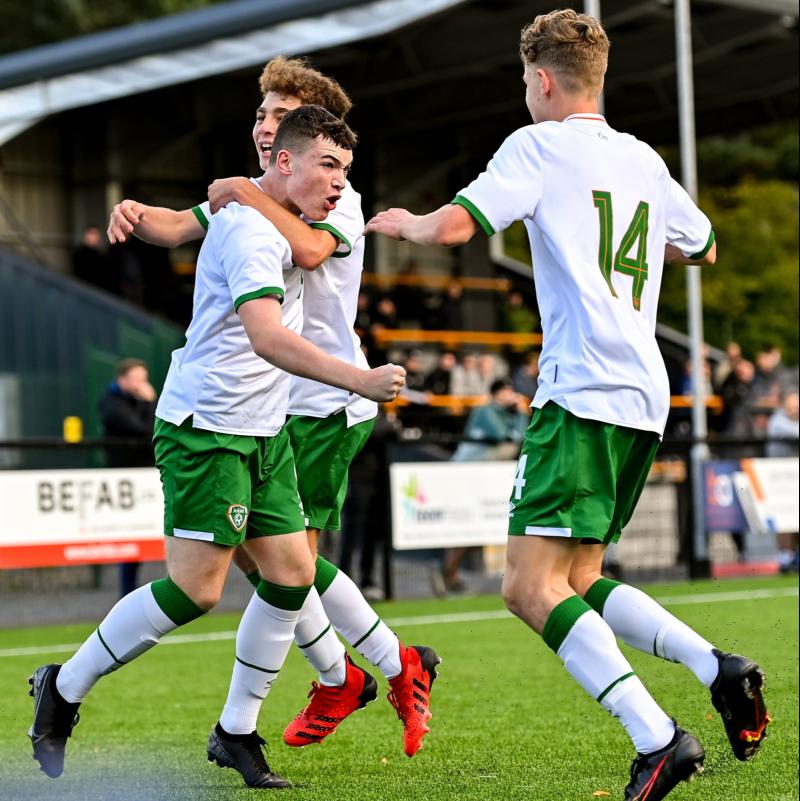 Limerick teenager Cillian Mulvihill, left, is congratulated after scoring for the Rep of Ireland U16 side in their Victory Shield win over Northern Ireland in Belfast

A WEST Limerick teenager played a starring role at the Republic of Ireland U16 side scored a 3-0 win over Norway in a friendly fixture in Spain this week.

Cillian Mulvihill, from Glin, impressed for Paul Osam's side as they opened their run of three friendly fixtures in six days with a convincing win in Polop.

The Rep of Ireland U16 side take on hosts Spain later today, Wednesday, at Orihuela before renewing rivalry with Norway on Sunday.

The friendly fixtures follow the MU16s involvement in the Victory Shield in Belfast last month which ended on a high with a 2-0 win over neighbours Northern Ireland.

Former GB Rovers player Mulvihill set the Rep of Ireland on the road to victory in that game when scoring in the opening half in Belfast.

Cillian Mulvihill impressing for the Limerick FC U13 side which reached the prestigious SSE Airtricity U13 League Cup final in 2019, when he scored two goals in the 5-3 defeat to St Patrick's Athletic in the final played at Jackman Park.

That Limerick FC U13 side was managed by former Treaty United senior women's manager Niall Connolly, who played a significant role in the striker's impressive development and continues to offer words of advice and encouragement to the Rep of Ireland under-age international who has worked away back to top form in the green of Ireland following his recovery from a long-term injury.

He is a third year student at Tarbert Comprehensive School.