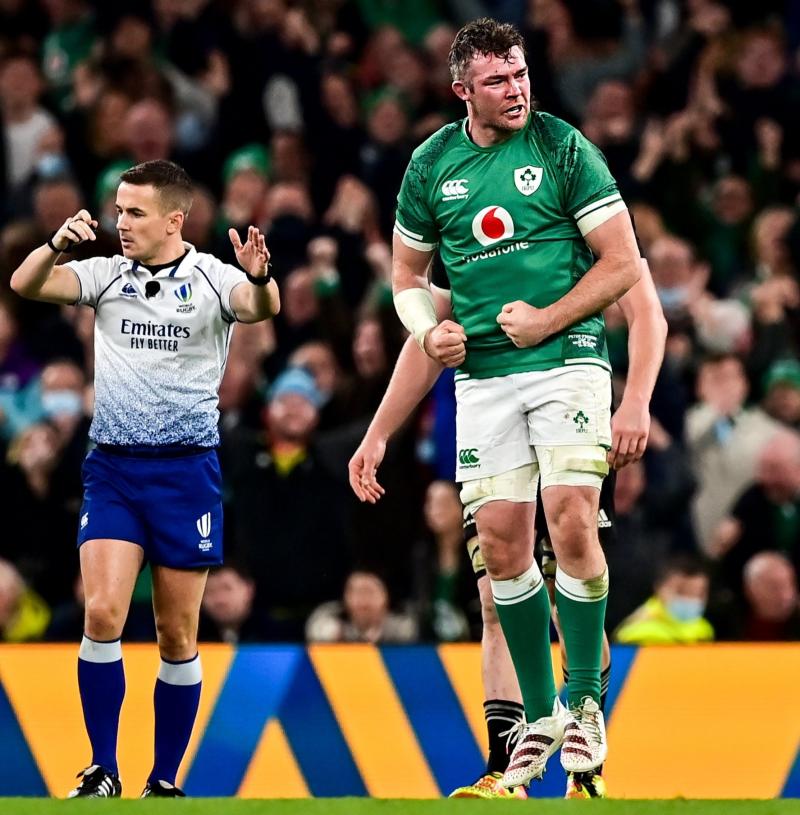 IRELAND made it a magnificent seven of Test victories in a row and lowered New Zealand's colours for just the third time in 33 meetings when recording a convincing 29-20 victory in their latest clash at a sold-out Aviva Stadium on Saturday afternoon.

Andy Farrell's Ireland side dominated the All-Blacks to claim a statement win in a sensational match before a raucous crowd of 52,000.

Ireland were good value for their win against a New Zealand side that frustrated their hosts for large parts of the first half with a exceptional backs-to-the-wall defensive effort.

Five Munster players introduced in the second half, joining the province's only starter in the game, winger Andrew Conway on the pitch, all made significant contributions to the victory

The home side was unable to add to James Lowe's early score, despite spending most of the the opening period camped deep  in opposition territory.

Hooker Codie Taylor's try came as a sucker punch for Ireland and saw them trail by five at the interval, 5-10.

Re-live it all. A special day at @avivastadium, with 52,000 of you with us every step of the way #TeamOfUs | #IREvNZL pic.twitter.com/j5hJRp1ODT

A hat-trick of late penalties, including one terrific effort from half way, from replacement out-half Joey Carbery ultimately guided Ireland home.

* ‘Alone You Stand’  a tribute to the late Anthony Foley, written and performed by former Munster and Ireland centre and Hermitage Green singer Barry Murphy received an international premiere at half time in the Ireland v New Zealand match at Aviva Stadium today, marking five years since the untimely death of one of the legends of Irish Rugby.