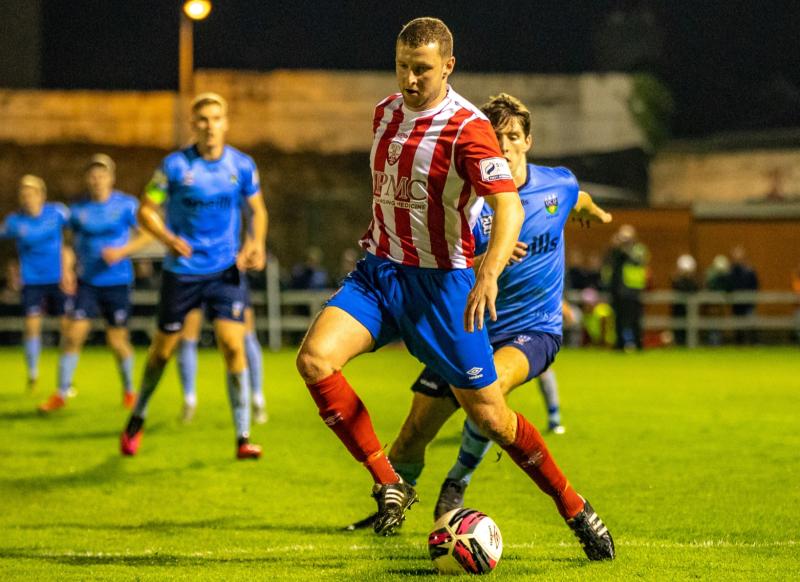 A CONTROVERSIAL red card shown to Stephen Christopher proved costly as Treaty United’s valiant comeback effort was stopped in its tracks at the UCD Bowl.

Tommy Barrett’s side came into the tie with a three-goal deficit from the first leg and little expectation on their shoulders but they gave the Students a royal scare in South Dublin.

Conor Melody had set the Limerick side on their way inside the opening ten minutes and, when Anthony O’Donnell powered home a header before the hour, the unlikely looked on the cards.

Christopher, who had provided the cross for O’Donnell moments earlier, was shown a straight red as he was judged to have left his studs in on UCD full back Eoin Farrell.

There seemed little intent to the Corkman’s challenge but it was clumsy and, with Farrell unable to continue, enough to persuade referee Alan Patchell to reach for his back pocket.

Still, the visitors had chances to level up before Adam Verdon finally made the home side’s pressure tell against ten men.

A large band of Treaty fans travelled to Belfield less in expectation of an unlikely result than to pay tribute to the character their side has shown in their first season in the league.

Wow, what a game we have here..

Treaty United have pulled yet another goal back, it's now just 3-2 on aggregate to UCD!

They got a little more than they bargained for as, for the first 60 minutes, what would certainly have been one of the league’s all-time greatest comebacks suddenly seemed possible.

A mix-up between Harvey O’Brien and Farrell presented Melody with an early chance to volley home, and his well-hit effort squirmed in the bottom corner past Lorcan Healy.

As the away fans chanted “we’re going to win 4-0,” Tadhg Ryan atoned for his costly error for UCD’s opener in Limerick to superbly tip over Liam Kerrigan’s goalbound strike.

Marc Ludden somehow managed to smuggle a Colm Whelan header out of the bottom corner and away from the baying UCD attackers as Treaty had all hands on the pump.

Ryan somehow managed to deny Whelan with a flying save early in the second half and it appeared this might just be Treaty’s day.

Those thoughts became concrete when Ludden found Christopher with a throw and his right-footed cross was buried by the head of O’Donnell.

They evaporated just as quickly when Christopher was given his marching orders and, though Dean George had a chance moments later, Verdon would eventually force the ball home.

Sub Willie Armshaw headed a great chance over as Treaty looked to force a grandstand finish but Ryan was the harder-working goalkeeper in the six added minutes as UCD clung on.