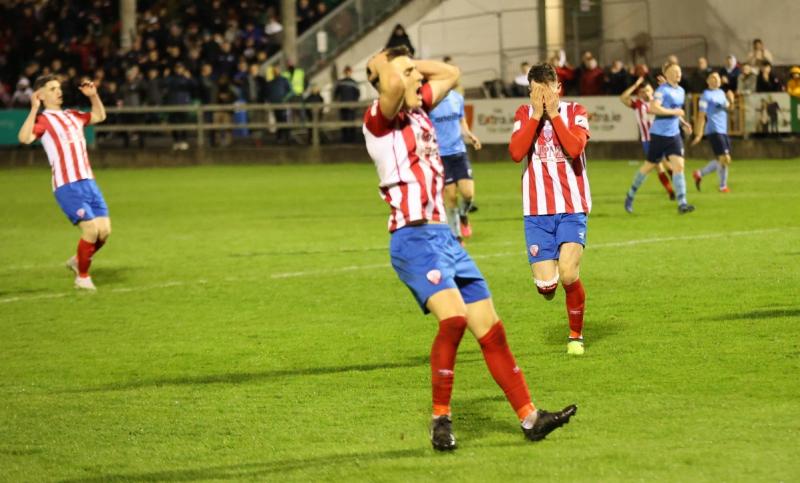 TREATY United are facing an uphill battle in their bid to extend their SSE Airticity League First Division promotion run after suffering a disappointing 3-0 defeat to a slick UCD side in their semi-final play-off first leg tie before a bumper attendance at the Markets Field on Wednesday night.

A first half goal from Paul Doyle and two late strikes from Colm Whelan have left the students in a strong position to advance to the First Division promotion final ahead of next Sunday's second leg meeting between the sides at Belfield Bowl, 5pm.

While the three-gol defeat was harsh on the Limerick-based side, there was no doubting UCDs superiority on the night.

This was an uncharacteristically sluggish performance from the home side who have exceeded expectations by reaching the promotion play-offs in their inaugural season in the First Division.

It was a frustrating night for Treaty United in Garryowen, given the high level of display Tommy Barrett's side had produced throughout their fairytale season.

However, on this occasion the home side lacked the energy, guile, craft and cutting edge to unduly trouble their impressive opponents.

The three previous meetings between the sides this season had produced 11 goals. All three games were won by the home side, Treaty emerging victorious 2-1 at the Markets Field in July, while the Dublin students recorded 3-2 and 2-1 wins at Belfield Bowl.

Third-placed UCD had finished four points ahead of fourth-placed Treaty United in the First Division table at the end of the 27-game regular season.

Treaty United manager Tommy Barrett made three changes to his starting XI from the onw which defeated Cabinteely on Friday as Marc Ludden, Anthony O'Donnell and Matt Keane come into the line-up in place of Alan Murphy, Joel Coustrain and Dean George.

Given how much there was at stake, it took both sides some time to play themselves into the game.

Stephen Christopher flashed an effort across the goalmouth in the fourth minute for the home side, while Paul Doyle's effort flashed over the crossbar for the students eight minutes later.

On 20 minutes, Treaty's Clyde O'Connell brought the sizeable home support to their feet when latching onto the ball outside the UCD penalty area before smashing a terrific effort goalward, only for the ball to slide past the right hand upright.

The visitors hit the front on 34 minutes and the goal was of the very soft variety. From a free-kick out on the right, Paul Doyle sent an in swinger towards the Treaty goal. The ball deceived home 'keeper Tadhg Ryan, who has been otherwise ultra consistent this season, and the defenders before flying into the back of the net.

It was a big blow for the home side, given the tight nature of the contest to that point.

Treaty struggled to create anything by way of a clear-cut chance before half-time as the students maintained their 1-0 advantage until the break.

The third quarter produced little by way of scoring opportunities. It was UCD who came closest to grabbing the game's second goal on the hour mark, but Treaty keeper Ryan did very well to get down smartly to save Sean Brennan's volleyed effort.

Treaty boss Barrett made a double substitution soon after in a bid to reignite the home side's challenge with Sean McSweeney and Dean George sprung from the bench.

However, despite those changes it was UCD who created the next decent opportunity of the game. However, keeper Ryan did very well to block Jack Keaney's attempt from a free-kick. The ball spilled loose in the six yard box. However, alert defender Anthony O'Donnell cleared to safety.

To their credit, Treaty United continue to battle and the home side cam within a whisker of grabbing an equaliser in the 78th minute. Stephen Christopher created the opening with some neat footwork and centre fior Dean George. However, his effort on goal flashed just outside the right hand upright.

UCD took a firm grip on the play-off two minutes later as Colm Whelan fired home to help the students into a 2-0 lead.

The two sides will do it all again in a crucial second leg fixture at Belfield Bowl this Sunday afternoon at 5pm.

The winners of that tie will face either Galway United or Bray Wanderers in the First Division promotion play-off final later this month.