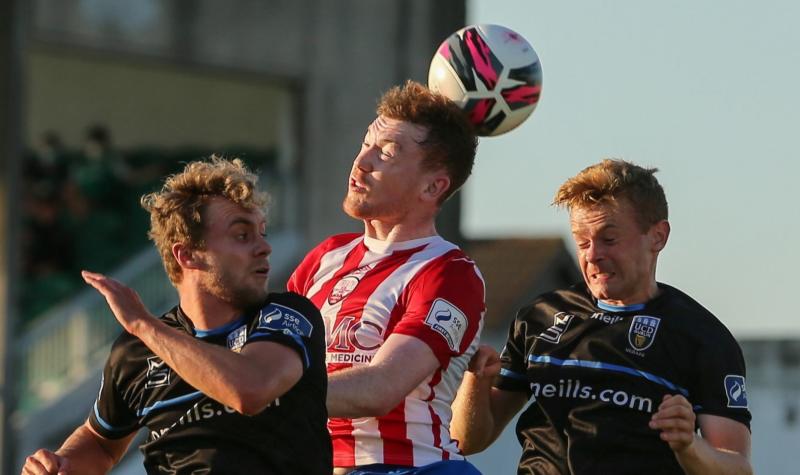 Tommy Barrett's Treaty United side will take on UCD in the first leg of their SSE Airtricity First Division play-off semi-final fixture tonight at the Markets Field at 7.45pm.

The second leg will then take place at the UCD Bowl this Sunday evening at 5pm.

The eventual winners of the tie will take on the winners of the other play-off semi-final fixture between Galway United and Bray Wanderers in the First Division promotion play-off final which is provisionally set for Friday, November 19.

Treaty United finished off their programme of regular season fixtures on Friday night last when scoring a 2-0 victory over Cabinteely at Stradbrook.

Willie Armshaw and Josh Quinlivan scored the goals for Tommy Barrett's side in the second half. It was Armshaw's fourth league goal of the season, while the highly-regarded Quinlivan was scoring for the first time at senior level.

Treaty and UCD have met three times in the First Division already this season.
The most recent meeting between the sides late last month ended in a 2-1 win for the students at Belfield. Both sides had already secured their place in the play-offs prior to kick-off.

Dean George was on target for Treaty to bring the visitors level in the game. However, goals from Liam Kerrigan and an OG saw the home side claim the three points on offer.

An earlier meeting between Treaty and UCD at the Markets Field in July ended in a 2-1 win for the Limerick-based side. Captain Jack Lynch scored both Treaty goals on that occasion. Lynch’s opener was cancelled out by Colm Whelan’s penalty shortly after half-time before the Treaty skipper replied with the decisive goal moments later.

The first ever meeting between Treaty and UCD at Belfield in May ended in a 3-2 win for the home side at the end of a see-saw battle. Treaty had led the game 2-0, thanks to goals from top scorer Sean McSweeney and Kieran Hanlon in the opening half.

UCD were the top goalscorers in the First Division during the regular season, their tally of 55 being six more than league champions Shelbourne.

However, the Belfield side did concede more goals than any of the top six sides in the table as they leaked 38 goals over the course of the season.