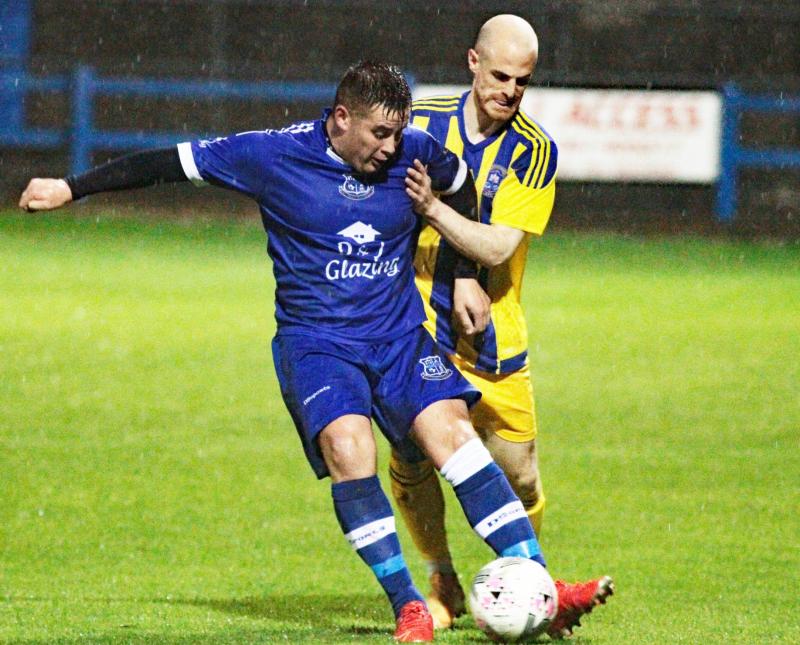 THE long awaited follow up to the FAI classic between these two sides was played on Sunday, but on this occasion it proved a much more lob sided affair with Pike Rvs dominating from the off to run out 5-1 winners.

In fact the final outcome would have been much worse but for a number of superb saves by Brian O’Connor in the Aisling goal.

Gary Neville, on the other hand was rarely tested such was the dominance of the Pike XI. From kick off it was obvious Aisling were not tuned in despite the best efforts of Shane Tracy.

Steve McGann helped himself to a brace of goals including a 70 yard wonder goal. Robbie Williams was as sharp as he has been all season while the home substitutions only improved the team.

The result pairs the two teams on 21 points at the top of the table but Pike have a game less played.
Pike took the lead on the half hour mark when Conor Layng raced onto a through ball and played the ball across goal for the in-running Aaron Murphy to score against his old team mates.

Kevin Barry, who has proven a deadly weapon for the Hoops this season, marked his introduction by poking the ball home from close range to make it 2-0.

With Aisling attacking from a corner kick, McGann headed clear and then followed up to let fly with a shot from the edge of his own penalty area that bounced over a stander ‘keeper and into the net at the far end of the field.

Aisling pulled one back when Shane Tracy curled a sweet free kick in at the foot of the post  but McGann restored the three goal advantage when he raced clear from his own half to score a superb goal.

Kevin Barry completed the rout when he was perfectly positioned to head in from a Colm Walsh O'Loughlin cross.

Fairview Rgs remain three points behind the leading two in the Premier League following a 4-1 win over Ballynanty Rvs at the Fairgreen on Saturday evening.

The sides were level at 1-1 at the break with little between the sides.

Once Mike O’Gorman poked Fairview in front on the hour mark, the Balla challenge faded and Fairview ran out comfortable winners in the end.

A constant downpour did not help the standard of play on offer particularly in the opening half when the home side were guilty of some sloppy passes. A huge improvement in the second half was enough to secure the three points.

Fairview opened the scoring with thanks to a little good fortune as Adrian Power’s attempts to clear his lines struck Steven Bradley, making his return to action, and rebounded past Jamie Stewart and over the line.

As one expects, Balla fought back and got their reward when Aidan Hurley headed home powerfully from Power’s free kick.
Balla started the second half well and were looking the hungrier side but on a quick breakaway
AJ Moloney’s ball across the face of goal was poked in at the front post by Mike O’Gorman.

It was 3-1 when Martin Deedy put Conor Coughlan inside his marker and the tricky winger cut infield to fire past Stewart.
Coughlan saved the best wine until last, when minutes later, he latched onto David Hannon’s clever back heel and fired a beauty from 25 yards to the roof of the net.

In the Premier A League, Carew Park took over second spot with an impressive 2-1 win over Athlunkard Villa. Mark McGrath and Adam Frahill were on the mark for the winners.

Mustapha replied for Villa. On Saturday evening, Charleville made a big statement in their promotion push when they beat Moyross by the odd goal in three. Pat O’Callaghan and Shane Dillon (that has a familiar ring to it!) came up trumps again for the home side. James Cleary scored for Moyross.

Corbally and Aisling B played out a scoreless draw.

In Division 1A, Knockainey’s run of good form saw them move into joint second spot following a 5-1 win at Shelbourne.
The county side’s resurgence is led by striker Nick Hayes. He scored three goals at Shelboure Park, his third hat trick in three consecutive games is most impressive.

Star Rvs continued on their fine form with a 5-1 win over Southend. Jason Daly was to the fore again for the winners with a hat trick, while and own goal and Adam McInerney made up the tally.

Corbally beat Kilmallock 4-1 thanks to scores from Gavin Healy, Shaun Madigan and a double from Rob Clancy.
Division 3B leaders Ballynanty Rvs B had to come back from two goals down to beat Corbally Utd C by 5-3. Barry Quinn scored three for the winners with Des Fitzgerald also netting a brace.

INTER-COUNTY YOUTHS
The LDL confirmed Dean Lillis as the new manager of the Inter County Youth team.
Any club, with a youth team, wishing to nominate players for the upcoming trials,should forward a list of players to Dean at deanlillis@gmail.com.
Trials will be held in the coming weeks prior to squad announcements.

Div 2A League
Corbally Utd B 4 Kilmallock B 1