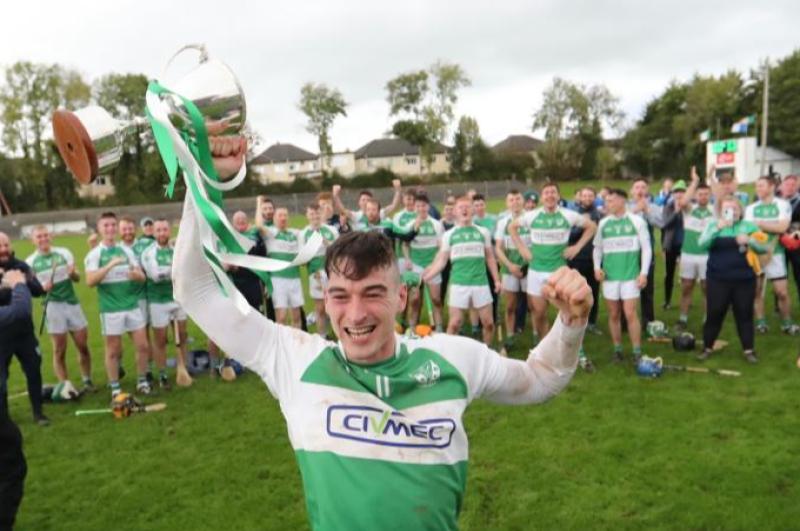 FIVE seasons in the third tier in Limerick club hurling ended for Effin on Saturday when their power in the middle third of the field rolled over Croagh-Kilfinny to capture the county intermediate hurling in Newcastle west on a score of 0-22 to 0-15.

Although they struggled to shake off the challenge early on a powerful second quarter opened up a seven point lead at the break which they held despite turning over to play into the breeze.

Croagh, who just four months earlier had escaped from junior ranks for the first time in their 118-year history, managed to curb the threat of Partick O'Donovan in the first first half, but the teenage sensation turned on the burners in the second period to rack up a personal tally of eleven points.

However, the real damage was inflicted by yet another overpowering display from Nickie Quaid who not only blunted the opposing attack, but also set up most of his side's offensives before injury forced his substitution midway through the third quarter.

Croagh's early attacks left them leading until Effin used their control around the middle to lead 0-7 to 0-4 at the first water break and then built on it for a half-time lead of 0-13 to 0-6.

Croagh's energetic restart yielded them three early scores but the Coshlea men responded to each before increasing their advantage to 0-18 to 0-10 at the third quater.

The Kilfinny club pulled the gap back to five with a run of scores but they were running out of time as O'Donovan found two late points to put the title beyond doubt.