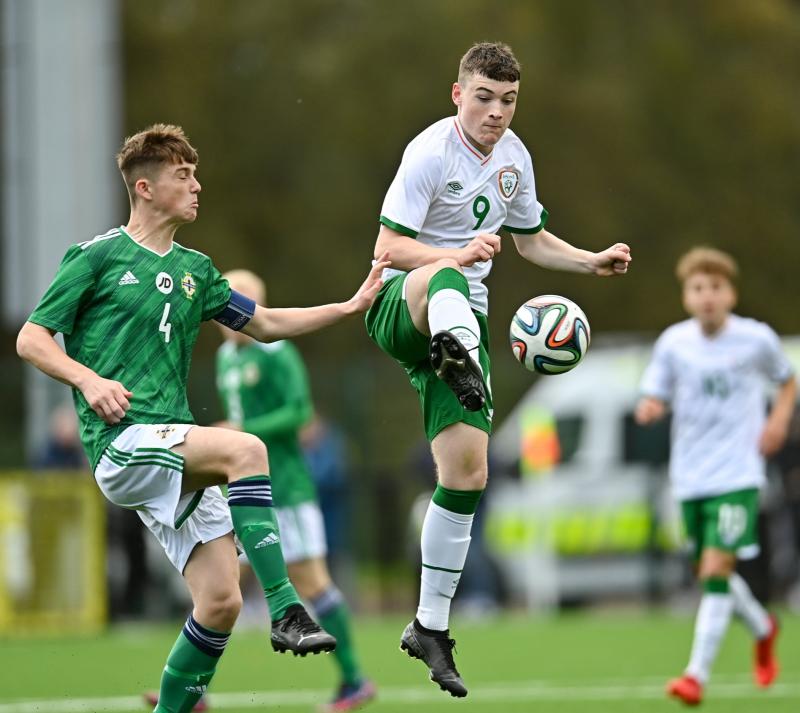 Goalscorer Cillian Mulvihill, from Glin, in action for the Rep of Ireland U16s in their Victory Shield win over Northern Ireland in Belfast on Friday

A TALENTED Limerick teenager scored for the Republic of Ireland U16 side in their impressive Victory Shield success over Northern Ireland in Belfast on Friday.

Cillian Mulvihill, from Glin, set the Rep of Ireland U16s on the road to victory when netting in the opening half as Paul Osam's side secured a deserved 2-0 win at Blanchflower Park.

Mulvihill played soccer with GB Rovers FC, before impressing for the Limerick FC U13 side which reached the prestigious SSE Airtricity U13 League Cup final in 2019.

That Limerick FC U13 side was managed by former Treaty United senior women's manager Niall Connolly, who played a significant role in the striker's impressive development and continues to offer words of advice and encouragement to the Rep of Ireland under-age international who has worked away back to top form in the green of Ireland following his recovery from a long-term injury.

Mulvihill is a third year student at Tarbert Comprehensive School.

Friday's win for the Rep of Ireland U16s was a big boost to the side who had suffered narrow back-to-back losses against Scotland and Wales earlier in the week.

They showed no sign of a lack of confidence starting the game on the front foot.

Twelve minutes into the game, Mulvihill provided a defence splitting ball to Kone Doherty who drove at goal and was only stopped by a last-ditch tackle by Bobby Harvey before the Derry City forward could fire at goal.

Before half-time Ireland were in front. Kone Doherty’s pressing saw him pinch the ball from his defender, his attempt was saved by Wilkins but Limerick teenager Mulvihill was the quickest to react and he found the corner for his first goal for his country.

The Rep of Ireland maintained their 1-0 lead until the visitors settled the game in the last minute Naz Raji’s dangerous ball across goal was met by Kone Doherty for an easy tap-in to win the game.