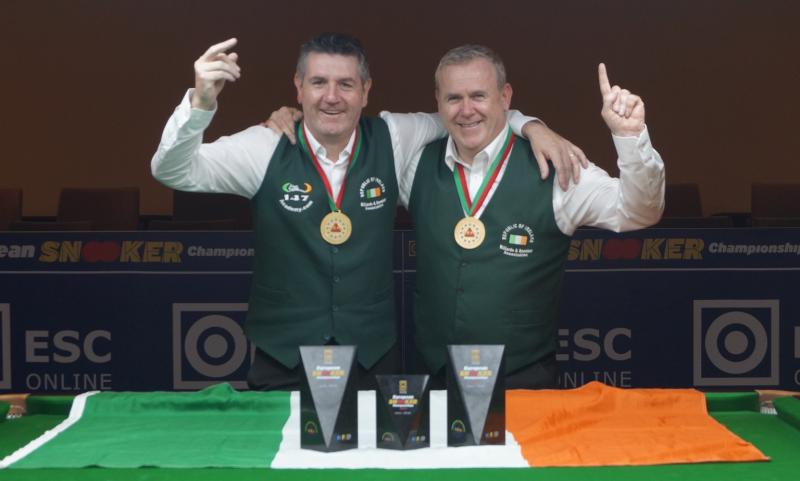 The Limerick duo of Frank Sarsfield and Mark Tuite defeated Team Malta by 5 frames to 3 in a thrilling match to claim the prestigious title.

The Limerick players defeated another Ireland combination of Dylan Rees and John O'Sullivan 4-1 in the quarter-finals, before easing past their Northern Ireland opponents 4-0 vin the semi-final.

The Limerick pair showed admirable composure to win the final two frames of their final with Malta after the teams were tied at 3-3.

Frank Sarsfield, from Clare Street, enjoyed an outstanding event in Portugal as he reached the final of the 2021 European Seniors Singles Snooker Championship earlier in the week. He played some excellent snooker to become only the fourth Irishman to reach that European Senior (Masters) Final. Sarsfield also recently won the SBI National Senior Title and the Limerick Singles title.

The victory was Mark Tuite’s third EBSA European Title as he had previously won the EBSA Senior Singles in 2013 and the EBSA team event with Anthony Bonnar in 2014.

National Coach PJ Nolan said: ” Frank and Mark played excellent snooker and it is fantastic for Irish Snooker to have another European Title in Ireland as every country around Europe are working hard on improving.

"Snooker & Billiards Ireland are so proud of all the players who have represented our association in Portugal this year. Everyone are so proud of Frank and Mark on how they stood tall to win this prestigious European title against a top class Malta side today. The amount of texts and phone calls from all around the world inspired them both to this fabulous victory today."

Both players dedicated this special victory today, in memory of Frank’s mother who had passed away recently. May she rest in peace RIP