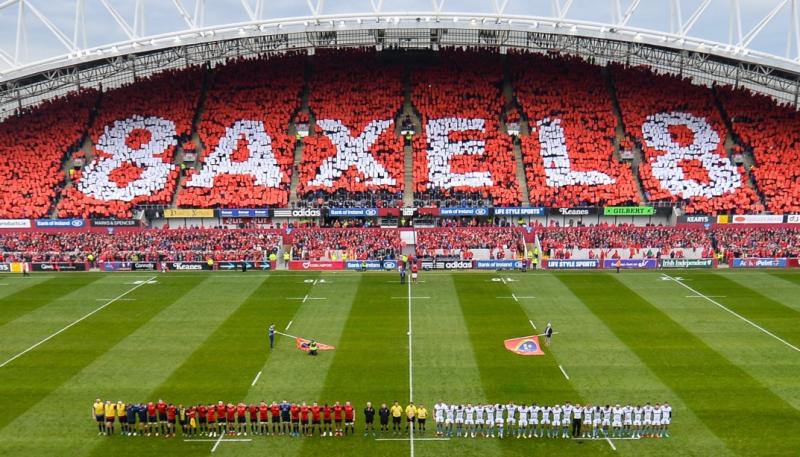 MUNSTER Rugby will pay tribute to the late Anthony Foley at Thomond Park tonight, their former number eight, captain and coach who passed away five years ago today aged just 42.

Munster are set to welcome their biggest crowd of the season to Thomond Park for the visit of Connacht as the provinces do battle in a crucial United Rugby Championship fixture.

More than 16,000 tickets have already been sold for the Round 4 interprovincial fixture which kicks-off at 7.35pm, live on RTE2.

Anthony Foley died suddenly at Munster's team hotel in Paris on the morning of the province's scheduled Heineken Cup fixture with Racing 92 on October 16, 2016.

Foley played 201 games for Munster, and won 62 caps for Ireland as a back-row forward and captained his country on three occasions. He also led Munster to their first European Cup triumph in 2006.

The Shannon RFC clubman made a try-scoring international debut against England in the 1995 Six Nations, but it was from 2000 to 2005 that he became established as a key figure in Ireland's team.

He retired from playing in 2008, leaving Munster after making more than 200 appearances for the provincial side.

He was named head coach of Munster in 2014 after having also coached the Munster 'A' team, the Ireland Wolfhounds and the Irish forwards on a temporary basis in 2012.

Ahead of tonight's game with Connacht, Munster defence coach JP Ferreira said it was fitting that supporters were back in the stadium to honour Anthony Foley's memory tonight.

Ferreira said: “It’s great that on his fifth anniversary we’ve got crowds back, that’s going to make it special for the group, for guys that played with him and the legacy he’s left behind.

“We’ll acknowledge that and we are looking forward to it.”

Munster second row Jean Kleyn said it was fitting that they would remember the late Anthony Foley during their interpro clash with Connacht.

“It’s a perfect night to remember him," Kleyn said.

“He’s not a memory. To a lot of people he’s still very much real and remembering him with a match back at Thomond Park after we’ve all had this sense of separation from each other and reality over the last 18 months/two years. I think it’s really fitting that we can remember him as well on this occasion.”