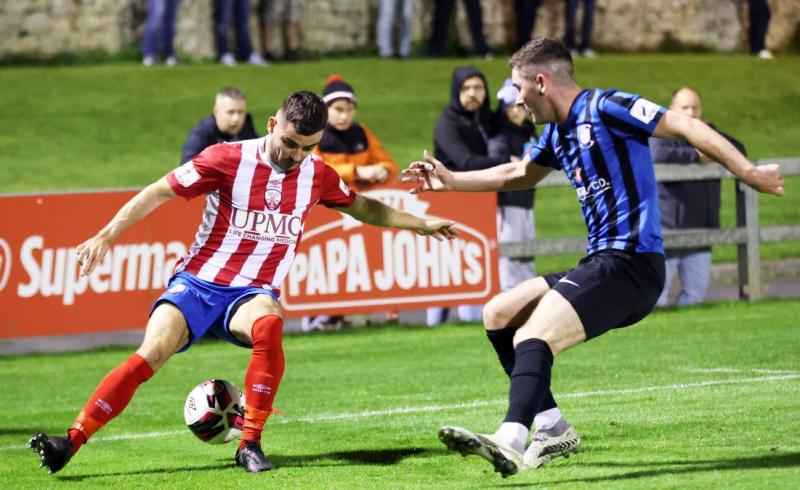 Stephen Christopher on the ball for Treaty United against Athlone Town at the Markets Field on Friday night Pic: Kieran Ryan-Benson

KIERAN Hanlon’s second half penalty booked Treaty United’s spot in the First Division play-offs, as it was enough to secure A 1-1 draw against a gallant Athlone Town outfit at the Markets Field on Friday night.

Now mathematically assured of their promotion play-off place, Treaty have also denied Athlone who needed the victory to continue their pursuit of a top five spot.

A boisterous home support, of nearly 2000, cheered those in red and white off as they achieved something that few would have predicted last winter, when Tommy Barrett quickly assembled his squad.

Home captain Jack Lynch was forced to take a place on the bench, having been delayed on-route to the game, owing to traffic congestion due to an earlier road traffic collision on the Limerick-Galway motorway. In his place was the returning Seán Guerins, while Mark Walsh returned to midfield.

Joel Coustrain went close early on, drilling low from just inside the area only to be denied by Michael Schlingermann’s smart save.

Doona opened the scoring on 25 minutes. He had earlier had a pair of wayward efforts but once again was allowed cut in from his left-wing berth and take a shot. This time, his effort was accurate and there was little Tadhg Ryan could do about it.

Treaty lost Coustrain to injury just before the interval, in what was a lacklustre opening stanza from the home side.

Kieran Hanlon and Callum McNamara both forced Schlingermann to make saves early in the second half, the latter a fine stop from the head of McNamara. Treaty did play with more drive and quality after the restart.

This was rewarded in the 74th minute when Hanlon netted his fifth goal of the season.

Armshaw’s stinging shot was spilled by Schlingermann, before Kieran Hanlon was upended by the ‘keeper when chasing the rebound. He made no mistake with the spot-kick for the all-important equaliser.

Treaty now face a pair of away games to conclude the regular season – starting with a clash with UCD next week before another visit to Dublin to play Cabinteely at the end of the month.