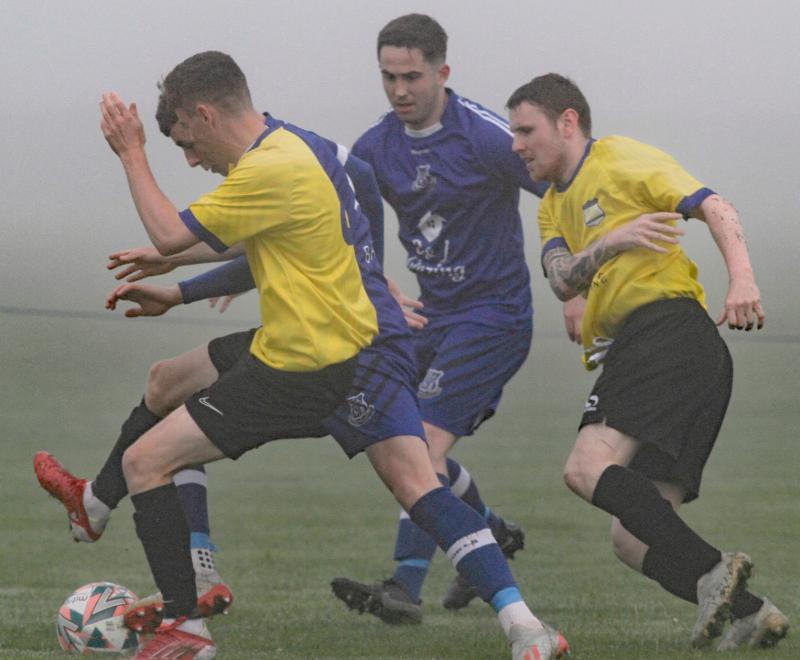 CURRENT holders of the FAI Junior Cup, Fairview Rgs advanced to round three with a hard earned 3-2 win over Nenagh at the Tipperary venue.

Shane Duggan put Fairview on their way and AJ O’Connor made it 2-0 for the visitors. Kieran Barr pulled one back for Nenagh but Mark Slattery scored again before half time.

The second half was less hectic, until the 80th minute when Saeed Ryan netted to put the minimum between the sides.

That was as good as it got for Nenagh, as Fairview held on to set up a home tie versus Castle Rvs in the next round.

Ballynanty Rvs qualified for a tilt with Mungret Regional for a place in the open draw stages of the FAI Junior Cup following a 2-0 win over Carew Park on Sunday morning.

The game in LIT, which kicked off in a thick fog, was evenly balanced when Aaron Nunan netted from close range.

The home side were guilty of squandering a number of chances, which kept a very good Carew XI well in the tie until Adrian Power tapped home a second in the dying minutes.

It was a good showing by Albert Slattery’s side who must be hot favourites for a return to the top flight.

Aidan Hurley, Jake Dillon and Adrian Power were prominent throughout for the winners.

Mungret Reg beat Granville Rgs 4-2 on Sunday to set up a round three clash with Ballynanty Rvs.

Pat Aherne put Mungret ahead but the Premier side lost the lead and goalkeeper James Roche shortly after when Nathan Walsh scored from a spot kick.

Aherne and Walsh traded goals again to leave the half time score 2-2.

After the restart the home side put their stamp on the game despite the numerical disadvantage. Aherne completed his hat trick and Aaron Long also netted for the winners.

A full-blooded cup tie in Kilmallock saw Regional United pp the home side with a last-minute winner to set up a third-round tie at Pallasgreen or Parkville.

Kilmallock went ahead after ten minutes when Jack Maguire netted.

Regional were back on level terms when a well worked short corner saw Edward McCarthy fire a rocket like shot into the top corner.

Regional squandered good second half opportunities through Jack Arra and Kieran O’Connell but got their reward with just a minute remaining when Andy Quaide raced onto a through ball and kept his cool to fire past Lorcan Casey in the home goal.

There were three red cards brandished in the final minute, belying what was a sporting game in the main.

Geraldines tale of woe to date this season, continued on Saturday evening when they fell heavily to high riding Premier A side Charleville.

A home win was always a possibility in this one and Charleville believed it too as they were on the front foot from the kick off.

Geraldines proved a tough nut to crack and the game was scoreless at the break. However after the restart two goals from Shane Dillon and one from strike partner Cian McNamara put Charleville well in control, before substitutes Gary Ward and Dylan O’Donoghue added to the Dines misery.

While it is no comfort, the result will allow ‘Dines to focus on their League fight in the coming weeks.

Castle Rvs FAI run continues after they edged out Corbally’s Bee string with a a 1-0 win.

The game was scoreless at the break, thanks in large part to the heroics of United keeper Sean McNamara.

Cian Enright was sprung from the bench in the second and he turned out to the match winner scoring the only goal of the game.

Aisling Annacotty are new outright leaders in the Premier League after a hard fought three points went their way in a 3-2 win at home to Coonagh Utd.

Coonagh took the lead after just three minutes when Ian Considine powered home a header from a Luke Doherty cross.

The visitors were in fine form and had Aisling rattled. However, Liam Quinn headed home to level the tie and the same player scored again minutes later with a well struck shot.

Blake Curran headed in a third for the leaders before the break.

Shortly after the restart, Ger Myles was upended in the area and dusted himself down to convert the resulting spot kick.

It made a nervous finish for the home side, not helped by Shane Clarke’s penalty being saved by Josh Sheehan. In the end the three points put Aisling top of the pile.

Pike Rvs eased to victory in the Munster Junior Cup, providing much too strong for Div1B side Glenview Rvs.

The Premier side showed no mercy as Cian Collins bagged four goals. Conor Layng scored a double while Danny O'Neill and Steve McGann made up the tally.

Fairview Rgs advanced to round three of the Munster Junior Cup after beating Mungret Regional’s B string on Wednesday evening.

Fairview took the lead after 15 minutes when Jamsie Fitzgerald’s corner kick was finished to the net with a powerful first-time effort by Mark Slattery.

The visitors belied their Division 1B status and they caused plenty of problems for the Premier side but Mike O’Gorman eased Fairview fears when he scored from close range in the second half.

AJ Moloney completed the scoring with another close range effort.

Holycross fell 2-0 at home to Aisling Ann B for whom Caimin Ayres and Calum Ryan obliged while goals from Dave Ryan (2), Jack O'Carroll and Brian Quinn secured a 4-3 win for Murroe over Cappamore

Josh Carey and James Byrnes scored for Patrickswell but they went down heavily to Knockainey for whom Nick Hayes, Matt O'Connor, James Hayes, Shane Finch, Dara Cunningham and Kyle Murphy were among the goals.

Regional Utd B increased their lead at the top of the table in Division 1B with a six-goal win over Newport. The League’s top scorer, Gerry Fitzpatrick added another four to his tally. Sam Gleeson and Ben Carew also scored.

In Division 2A Janesboro moved three points clear following a 3-1 win over Murroe B. Jack Donnelly scored for Murroe while Logan O'Byrne netted three for ‘Boro.

Shelbourne B edged past Lisnagry hanks to scores from Martin Wallace and Simon Fitzgerald while Nenagh B chalked up a big win over Athlunkard Villa C. Two goals apiece for Casey Finn, Igor Gurjanov and Matt O'Gorman as well as a Diarmuid Fitzpatrick strike did the damage.

In the FAI Youth Cup there was mixed fortunes for local sides. Charleville travelled to Broadford and came away with a 3-2 win thanks to scores from Adam O'Connor, Dion Curtin and Matthew McCormack while Calum Murphy’s goal for Fairview was in vain as Ballingarry ran out 2-1 winners.