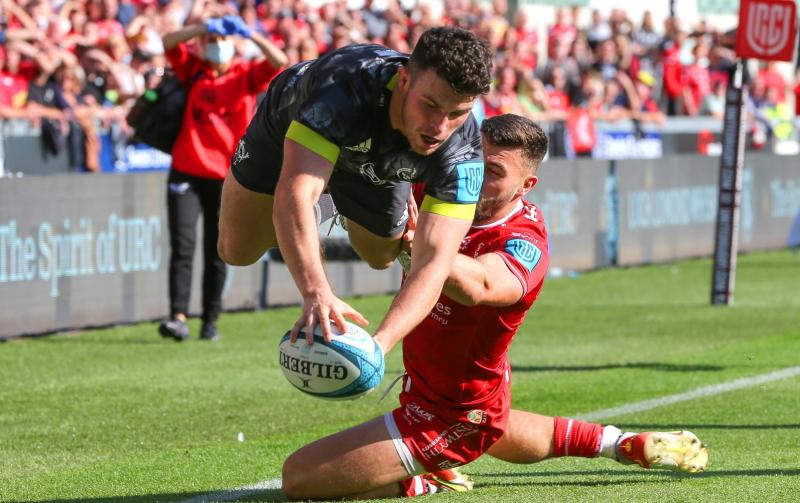 A YOUTHFUL Munster Rugby side racked up six tries in thumping the Scarlets 43-13 in their United Rugby Championship third round fixture at a sun-drenched Parc y Scarlets on Sunday.

Munster, with 11 changes in their starting line-up form the side which defeated Stormers eight days ago, stunned their hosts, scoring three tries in either half to increase their winning record against Welsh opposition to 15 games.

Munster's third bonus point win to start the season came at a cost, however, as their South African World Cup-winning second row RG Snyman limped out of the game just 10 minutes after being introduced as a second half replacement.

All Munster fans will be hoping that the injury does not prove serious as Snyman just recently returned to action following a long-term knee injury.

The Scarlets, who fielded 11 international players in their line-up, had lost just one of their previous six home matches across the PRO14, Rainbow Cup and URC prior to kick-off.

However, they were no match for a hugely impressive Munster side, who played with admirable composure and accuracy despite their youthful line-up.

A much-changed Munster side made the perfect start when 23-year-old number eight Jack O'Sullivan raced onto Neil Cronin's inside pass to race clear of the Scarlets defence and touch down after just three minutes.

Out-half Healy added the extras for 7-0.

The visitors then added to their advantage a few minutes later when out-half Healy kicked a penalty for 10-0.

The Scarlets made it a one-score game in the 17th minute, however, when out-half Sam Costelow dissected the posts with a penalty kick after an earlier miss to make it 10-3.

Munster scored a terrific second try in the 24th minute to silence the home support. Out-half Healy cleverly spotted width on the right and found Calvin Nash with a delightful skip pass.

Limerick winger Nash showed a terrific turn of pace to scorch up the flank and deep inside the Scarlets half. Nash found centre Liam Coombes who had a clear run to the tryline.

It was the Garryowen clubman's third try in just eight days as the West Cork native dotted down twice for the Light Blues in their Energia Energy All-Ireland League Division 1A clash at College Park the previous weekend.

Healy was on target with the conversion to put 14 points between the sides at 17-3.

The Scarlets got back in the game out of nothing in the 29th minute. Out-half Scarlets Costelow kicked in behind the Muster defence and full-back Johnny McNicholl pounced on the ball to score.

Costelow's conversion made it a one-score game at 17-10.

The momentum in the game shifted with that score. Costelow knocked over a 33rd minute penalty to leave just four points between the sides at 17-13.

However, to their credit, a resilient young Munster side hit back strongly and with the referee playing advantage, Healy picked out Nash with a pinpoint pass and the Limerick winger scored superbly in the corner for 22-13.

Munster increased that nine point lead which they held at half-time when prop Jeremy Loughman burrowed his way over the tryline from close range to score the bonus point try.

The hugely influential Healy aldo added the extras for a 16-point advantage, 29-13.

The shell-shocked Scarlets came in search of the try which they hoped would reignite a comeback. However, despite conceding a number of penalties with

Munster then broke upfield and then pounced for their fifty try of the game. The marauding O'Donoghue made huge yardage with a terrific break up the middle of the field before cleverly kicking ahead.

Centre Coombes did superbly to collect the ball in one hand before touching down beside the uprights, for his second try of the game. Healy's conversion made it 36-13.

Munster were dealt a blow on the hour mark when the recently returned Snyman limped out of the game with an apparent knee injury.

The visitors crossed the whitewash for a sixth time when the excellent Chris Cloete powered over with Healy again adding the conversion for 43-13.

This was Munster's third successive bonus point win in the URC. Next up for Johann van Grann's charges is a six-day turnaround to the visit of Connacht to Thomond Park next Saturday, 7.35pm.