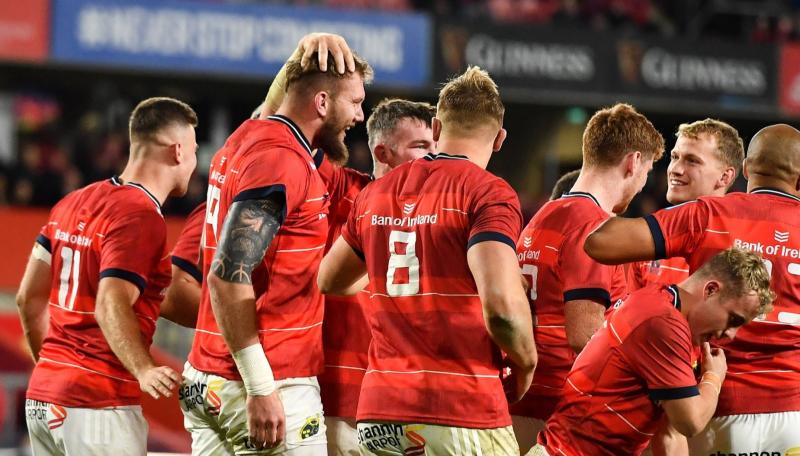 MUNSTER Rugby rallied strongly after a lacklustre opening 39 minutes to secure a 34-18 bonus point victory over the DHL Stormers in the United Rugby Championship at Thomond Park on Saturday night.

When South African side the Stormers raced into a 15-0 lead on the stroke of half-time, few in the official attendance of 10,723 could have expected Munster to turn the game around so convincingly before full-time.

After falling those 15 points in arrears, the home side hit back with 24 unanswered points of their own, including three tries, all from close range to change the complexion of the evening completely.

Munster were very fortunate to find themselves trailing by just eight points at half-time, 7-15, after being outplayed by the visitors for the vast majority of the opening 40 minutes.

The South Africans deservedly stormed into a 15-0 lead after the opening half an hour.

The Stormers cut the Munster defence open all too often in that opening quarter and managing to convert those line-breaks into two really well executed tries, the first from Warrick Galant.

The visitors struck for their second try when Ruhan Nel offloaded to Leolin Zas, who scampered down the left wing, before getting over in the corner. Libbok nailed the conversion for 12-0 before Gelant knocked over a 29th minute penalty for 15-0.

Crucially Munster gave themselves a lifeline on the stroke of half-time when flanker Jack O'Donoghue burrowed his way over from close rage. Carbery's successful conversion made for an eight-point differential.

The sin-binning of Stormers lock Salmaan Moerat four minutes into the second half changed the complexion of the game. Munster scored 12 unanswered points when Moerat was off the pitch as Jean Kleyn and Niall Scannell crossed for close range tries, with Carbery converting one.

O'Donoghue added the bonus point try on 56 minutes, when crossing for his second of the game for 24-15.

RG Snyman was introduced for his second appearance off the bench since recovering from a serious knee injury, the World Cup winner capping his busy display by scoring Munster's fifth and final try.

Substitute Ben Healy landed a long range penalty with the final kick of the game to complete the scoring.