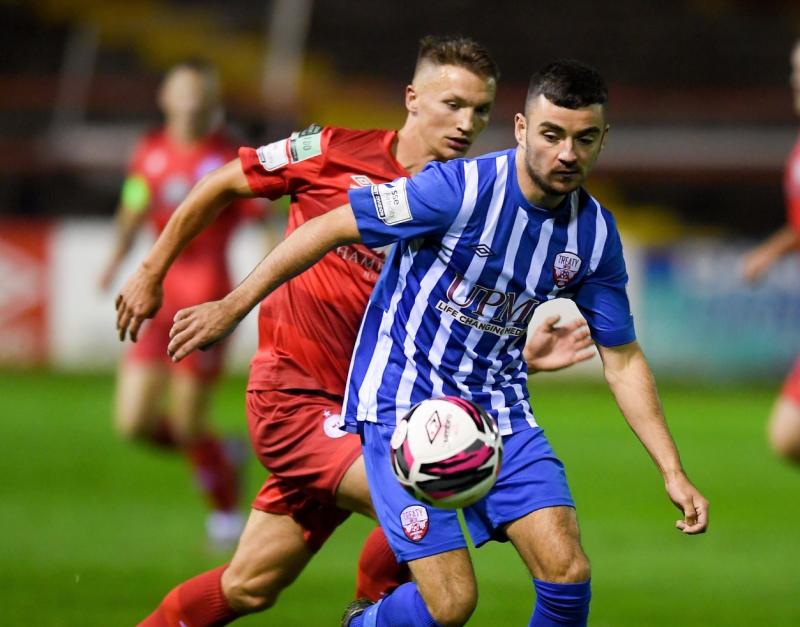 TREATY United's bid to secure a promotion play-off spot with three games to go in the SSE Airtricity League First Division came unstuck on Friday night as Shelbourne secure a dramatic 1-0 win over Tommy Barrett's side at Tolka Park.

Georgie Poynton's 74th minute goal from the penalty spot consigned Treaty to defeat and also ensured Shels' were crowned First Division champions and with it a return to the Premier Division next season.

Although disappointed with the defeat, Treaty remain well-placed to secure a promotion play-off spot. The Limerick-based side need to take two points from their last three league fixtures to guarantee a top five finish which secures a place in the play-offs.

Fourth-placed Treaty are seven points clear of sixth-placed Athlone Town who scored a last gasp win over Cabinteely on Friday night. The sides will meet at the Markets Field in two weeks times. It will be Treaty's next outing in the league as their scheduled game with UCD next Friday night has been postponed.

Home side Shels' created the first half chance of the evening on 16 minutes. However, Stephen Christopher produced an excellent block of a John Ross Wilson shot. From the resultant Shelbourne corner, visiting goalkeeper Tadhg Ryan gathered possession.

On the half hour mark Georgie Poynton let fly from range, but his shot flew just outside Ryan's left hand upright.

At the other end, Treaty created a decent opening in the 36th minute after Matt Keane's inviting cross from the right wing found Sean McSweeney but the West Limerick man headed over the crossbar.

Back came Shels' and the home side came oh so close to opening the scoring six minutes before half time but Michael O'Connor's header hit the upright.

The Dubliners did have the ball in the net in the 41st minute, but the goal was disallowed for a foul on Treaty netminder Ryan.

The game remained scoreless at half-time. Visitors Treaty introduced Kieran Hanlon in place of McSweeney at the break.

Treaty came agonisingly close to opening the scoring on 63 minutes when Marc Ludden's cross from the left was fired goalwards on the volley by Matt Keane. However, Keane's terrific effort was brilliantly tipped over for a corner by former Limerick FC 'keeper Clarke.

Treaty looked solid in defence until Shels were awarded a penalty in the 74th minute when Shane Farrell was judged to have bene fouled inside the penalty area and Georgie Poynton fired the ball past Ryan in the Treaty goal from the spot.

The goal proved to be the only goal of the game as Treaty suffered their sixth defeat of the campaign.

Treaty United's scheduled fixture with UCD on Friday night next has been postponed as the students have players called up for the Rep of Ireland U21 squad who are involved in international action. The FAI say details of the rearranged fixtures will be announced in due course.