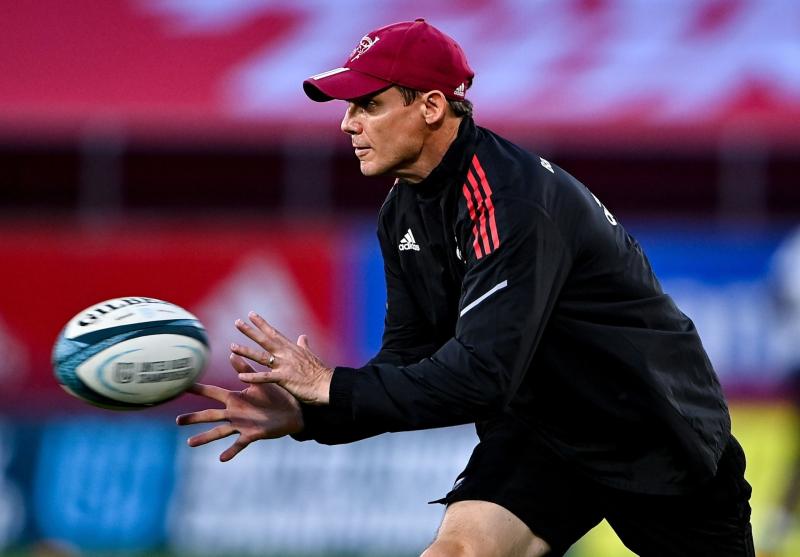 MUNSTER Rugby senior coach Stephen Larkham has revealed his desire to extend his time with the province beyond the conclusion of his current contract.

Larkham joined Munster Rugby from Rugby Australia as Senior Coach on a three-year-deal ahead of the 2019/20 season. His contract, along with other members of the Munster coaching team, is due to expire in June 2022.

Larkham’s coaching career began at the Brumbies in 2011 with the former Australia international elevated to the head coach role at the Super Rugby side within three years. He was later appointed to the position of Wallabies attack coach on a part-time basis in 2015, a role he combined with his Head Coach duties at the Brumbies.

He held this role as Australia reached the Rugby World Cup final in 2015 and departed the Brumbies in 2017 to work full-time for Rugby Australia.

Asked about whether he would like to extend his time at Munster beyond the end of this season, Larkham said this Tuesday: “Of course, we all do (want to stay), it's a great environment here at the moment.

“We certainly feel as though things are building in the right direction, we had a really good year last year and we want that to continue, we have a really good cohesion as a coaching group at the moment, we're really enjoying it.

“From a playing perspective, it's our third year together as a larger group so the environment's great at the moment.”

Munster's competitive season began on a bright note on Saturday night last when the province ram in six tries in scoring a bonus point win over the Cell S Sharks in their first United Rugby Championship fixture.

Another South African side visit Limerick this weekend as the Stormers face Munster at Thomond Park this Saturday, 7.35pm.