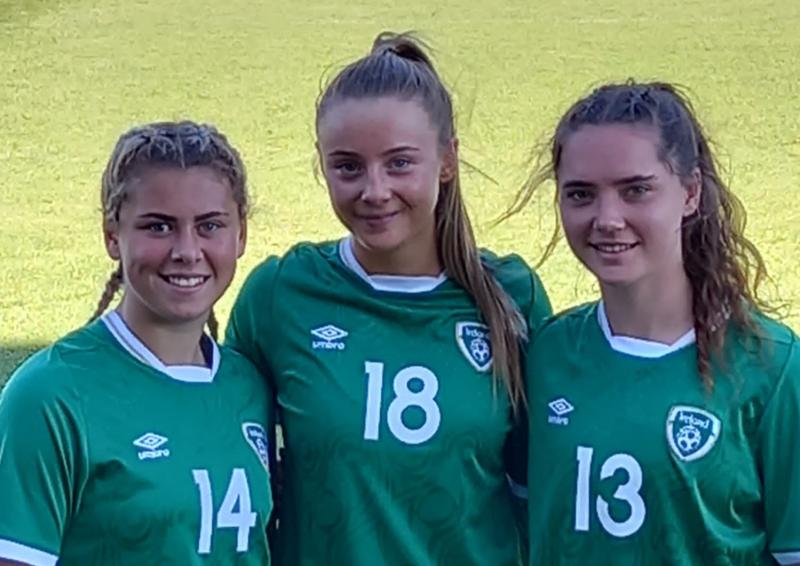 Limerick players Jenna Slattery, Nicole McNamara and Eve O'Sullivan who impressed for the Rep of Ireland U19s in their recent win over Portugal U19s

Limerick is to host UEFA Women's Under-19 European Championship qualifiers next month featuring four nations, including the Republic of Ireland.

The qualifiers, which also include England, Switzerland and Northern Ireland, will begin on October 20.

Dave O'Connell's Rep of Ireland U19 women's side will take on England at the Markets Field on Wednesday, October 20 at 7pm. On the same day at Jackman Park, Switzeraldn will face Northern Ireland with a 2pm kick-off.

Next up for the Rep of Ireland women's side will be a Saturday, October 23 meeting with Switzerland again at the Markets Field at 7pm. Earlier in the day, England and Northern Ireland will meet at Jackman Park at 2pm.

The Rep of Ireland U19s women's side then complete their programme of qualifiers against Northern Ireland at Jackman Park on Tuesday, October 26 at 1pm, with England meeting Switzerland at the same time at the Markets Field.

Rep of Ireland U19 manager Dave Connell who is no stranger to Limerick having managed here during his League of Ireland days held two four-day training camps with his squad in Limerick last August.

There was strong Limerick involvement in the Rep of Ireland U19 women's side which competed in an international tournament in Portugal recently, including the impressive 1-0 victory over the home nation.

The Rep of Ireland's starting line-up in that win saw Treaty United's Jenna Slattery at the heart of the defence as well as midfielder Nicole McNamara, who previously played for Ballingarry AFC and for the Treaty United U17 side last season.

Treaty United was also represented in the Rep of Ireland's starting XI by Eve O'Sullivan, who previously played with AK United.