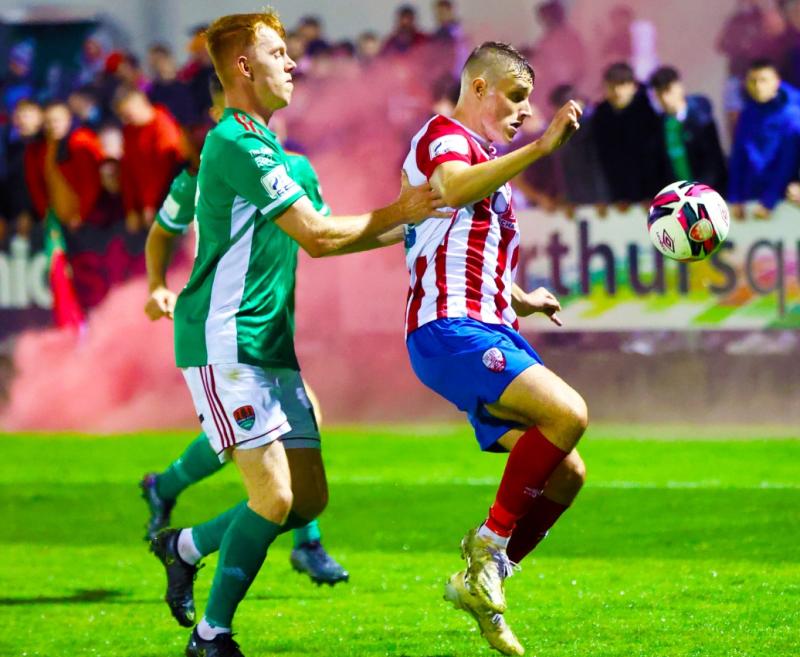 TREATY United played out an enthralling scoreless draw with Cork City at the Markets Field on Friday night as they dented the visitors hopes of joining them in the SSE Airtricity League First Division play-off spots.

Treaty United remain unbeaten in three meetings against Cork this year after two victories for Tommy Barrett’s side earlier in the campaign.

The result cements Tommy Barrett’s side in fourth spot in the First Division table with just two points needed to guarantee that top five play-off berth.

A lively home support was complimented by over 200 travelling Cork city supporters who added to to the occasion. However, the opening half was lacking in quality with defences largely on top.

There was flares and fireworks off the pitch, as the volume you’d expect of a Munster derby, but perhaps Treaty’s positioning in the table meant that they could be pragmatic. Those flares caused a number of disruptions to the game while

They were also without Mark Ludden for the first time, with Clyde O’Connell filling in at left-back.

Kieran Hanlon came closest for Treaty United after 15 minutes, but was denied by a wonderful block from Cian Coleman, after superb approach play from Stephen Christopher.

Cork for their part, dictated the tempo, but Colin Healy’s side were unable to unlock a resolute home defence. The closest they came was a Cian Murphy volley, but he was denied by Hanlon and Tadhg Ryan, who stayed alive to the corner which was only half-cleared.

After the interval Murphy went close again, but a Treaty leg sent his first time shot behind for a corner. Another man to try his luck was McGlade, once again cutting in and forcing Ryan into a solid save at his near post.

Christopher continued his impressive showing, earning a couple of corners. One of these was headed over by Charlie Fleming with his back to goal.

With McGlade looking threatening for Cork, Treaty unleashed subs Seán McSweeney and William Armshaw. They combined for a great chance late on as McSweeney almost steered home a delightful cross from the Cappawhite native.

UCD are now just a point ahead of Treaty, as Barret’s side travel to Shelbourne next week, knowing a victory will guarantee their top five spot.