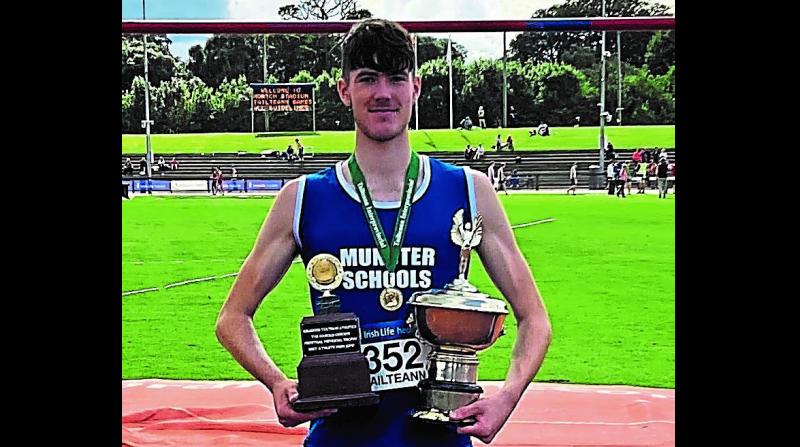 eoffrey Joy-O’Regan, of Sun Hill Harriers AC, who won the best male athlete of the championship at the Tailteann Games

MUT, formerly Cork IT, was the venue for a newly formatted Community Games competition on Saturday. The top two individuals from each event at County finals had to now qualify for the ‘All-Irelands’ in Carlow IT next weekend. Many of our Community Games areas had athletes competing.

The younger children from U8 to U10 compted in the morning . Zara O’Gorman was 3rd in U8 60m while Conor Oliver was 4th in U8 60m Boys section. Ciaran McLoughlin and Elsa Fahy had also qualified for this event.

At U10 Daniel McDermott took Gold in the 100m with Jake Barkley also making it to the final. In the girls U10 100M Katyln Foley was placed 4th with Kate Cantwell also competing. Sadhbh Donnelly took Silver in the 200m with Sophie O’Donnell also a qualifier from Feenagh Kilmeedy. Jack Ryan and Killian Coman were the boys U10 200m competitors.

Ellen Cagney secured the bronze medal in the U10 60m hurdles with Mila Hanafin also in the final. Leroy Cremin Newcastlewest took home the 4th place medal in the boys event with Iarla Kelliher also competing.

At U12, Megan O’Shea took Gold in the 100m with Emma Pethos in 3rd place. The boys event was hotly contested with Conor Kennedy and John Farrell competing. Alex Collins was 3rd in the boys 600m.

At U14 Éanna Ní Haighin was 2nd in the 100m with Maedhbh Purtill in 4th. Molly O’Mahony had a 4th place finish in U14 80 m hurdles with Niamh Hynes also contesting the final. Peter Ashe was 4th also in the boys hurdles .

Jack Crowley finished with a silver in the boys 800m and will have to be ready again for next weekend.
The U16 competitions included 1500m (Ross O'Carroll and Alan McCutcheon) 100m Angel Alfred winning gold and both Vivian Amaze (bronze) and Jayden Carmody (4th) medaling in the 200m.

Carlow IT will be the venue for the National Finals next weekend. Well done to all.

Well done to all who ran the VHI Virtual Women’s Mini Marathon including Patricia Wade, Joanne Browne, Maria Browne.
Shane O’Sullivan was fastest in a time of 17:53 at his 128th Parkrun at UL. All Parkruns including those at Mungret and Newcastle West resume from this Saturday .

On the back of an excellent performance last weekend Leagh Moloney (Gaelcholaiste Luimnigh and Emerald) has been selected to represent Ireland at the SIAB International on the 25th September in Derbyshire.
Congratulations and good luck to Leagh.