Limerick man impresses for Ireland amputee side at European Championships 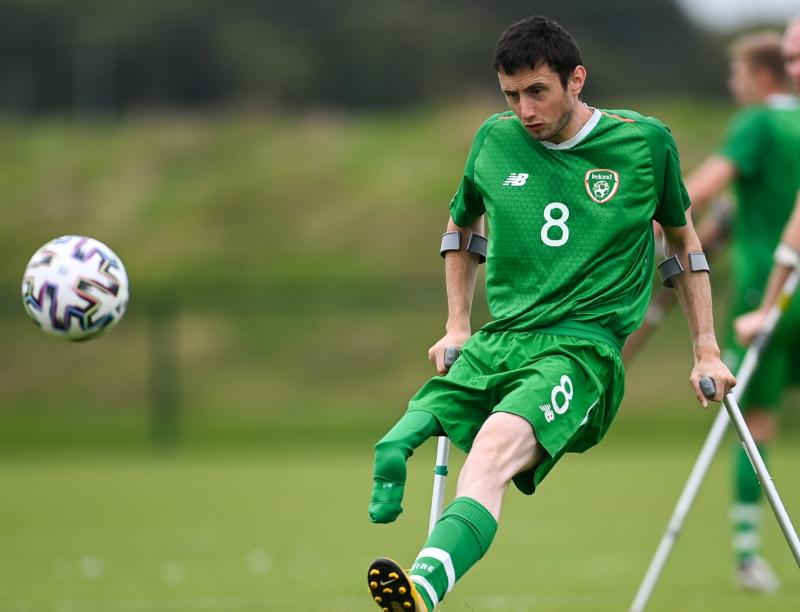 A LIMERICK man played a key role as the Irish Amputee International side ended their European Championship campaign with an eighth-place finish in Poland.

Pallasgreen man Patrick Hickey and his Irish team mates suffered a narrow defeat to France in their final play-off game in Krakow on Sunday.

Christy McElligott's Ireland team had a short turnaround following a disappointing extra-time defeat to Italy on Saturday afternoon and a much-changed side were unable to break a resolute French resistance as they lost by a solitary goal in their final game.

The Irish side began the campaign in fine form with an 8-0 victory over Belgium. McElligott's side quickly secured a quarter-final showdown by game two with a 2-1 win over Germany. The final Group C game against Russia in difficult weather conditions ended with defeat and a second-place finish resulting in a quarter-final tie with top ranked and defending champions Turkey in the last eight.

The Turkey side is made up of professional players, lived up to their pedigree. Ireland stuck to their game plan, but the bounce of the ball favoured the Turks who eventually ran out 4-0 victors. Ireland dropped into the play-off phase and Italy set-up to keep the potent attack at bay.

Ireland's top scorer James Boyle managed to force the game into extra-time, but the Italians broke Irish hearts as they scored twice on the break as McElligott's men pushed for the winner.

As the curtain came down over the finals, Ireland faced into their sixth game in seven days against France on Sunday. A much-changed Ireland matched the French early on, but it proved a test too far with France claiming seventh spot with a 2-0 win.

A top six finish would have guaranteed World Cup qualification, but Ireland must now wait as Europe seeks to add to their current participant count in the finals which Turkey will host next year.

Speaking on the experience Ireland Head Coach Chris McElligott was full of praise for the Boys in Green. "We have completed our European Amputee Football Championships in Poland and unfortunately we were not successful in finishing in the top six but our boys gave everything for their country and left everything on the field of play.

"I could not be prouder of this bunch of players and we are still in with a chance of World Cup Qualification position and we will be waiting in the wings to see if that becomes a possibility.

"It has been a great opportunity for the players and with James Boyle's strike against Belgium gaining 3.4million online views, it was among the special moments for the team," McElligott said.