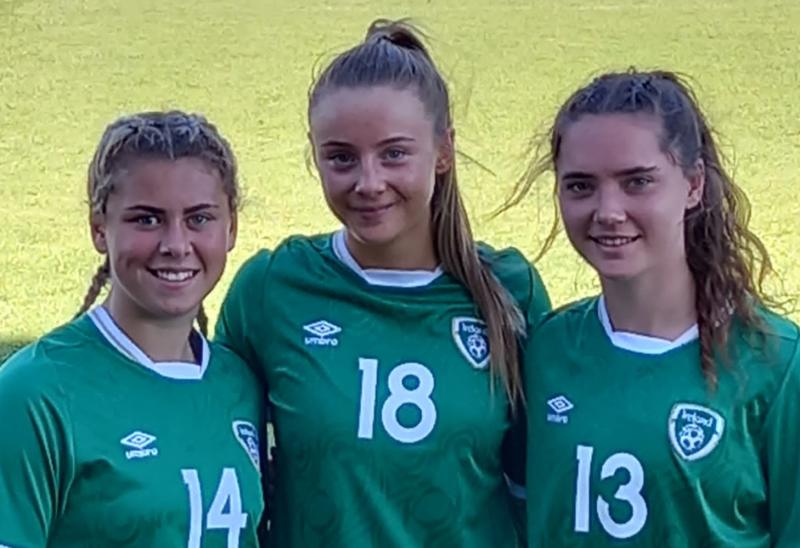 Jenna Slattery, Nicole McNamara and Eve O'Sullivan who impressed for the Rep of Ireland U19s in their win over Portugal U19s

LIMERICK players turned in eye-catching displays as the Republic of Ireland Women's Under-19s claimed an impressive 1-0 victory over Portugal in an International Friendly in Lisbon on Saturday.

The Rep of Ireland's starting line-up included Treaty United's Jenna Slattery at the heart of the defence as well as midfielder Nicole McNamara, who previously played for Ballingarry AFC and for the Treaty United U17 side last season.

Treaty United was also represented in the Rep of Ireland's starting XI by Eve O'Sullivan, who previously played with AK United.

Rep of Ireland Head Coach Dave Connell freshened his team up for Saturday's game by making 11 changes from the side that started the narrow 2-1 loss to Norway last Thursday in the first of three games in a mini tournament.

Several of the new faces impressed, including goalkeeper Savanna Duffy who was making her first start for the team, while the centre-back partnership of Limerick teenager Jenna Slattery and Abby Tuthill were up for this one.

Slattery, who has been sensational of late for Treaty United in the SSE Airtricity Women's National League, won aerial challenges, broke up play and made vital clearances as Portugal threw everything at Ireland early on.

With no breakthrough in sight, Portugal made four changes after the interval, but Slattery showed no signs of tiredness as she kept on repelling their every attack.

Ireland were not under pressure for the whole game though and typical of a team coached by Connell they were able to use the transitions and build play to get them higher up the pitch.

One such play came on 52 minutes when Limerick woman Nicole McNamara and Emily Corbet combined to win a free-kick on the left, swung the ball into the penalty area but it was just too high for Slattery as Tuthill dragged defenders away from her with a clever run.

The goal came shortly after that with Lynch dispossesses Portugal defender Ana Cruz just outside the box, controlling the ball and managing to hold off Cruz and Joana Prazeres before finishing with her right foot into the bottom corner of the net.

Portugal attempted to fight back but they could not break through as Duffy made some crucial saves and the late substitutes made by Ireland gave them some energy and stability at the right time.

Next up is a game against Denmark on Monday.