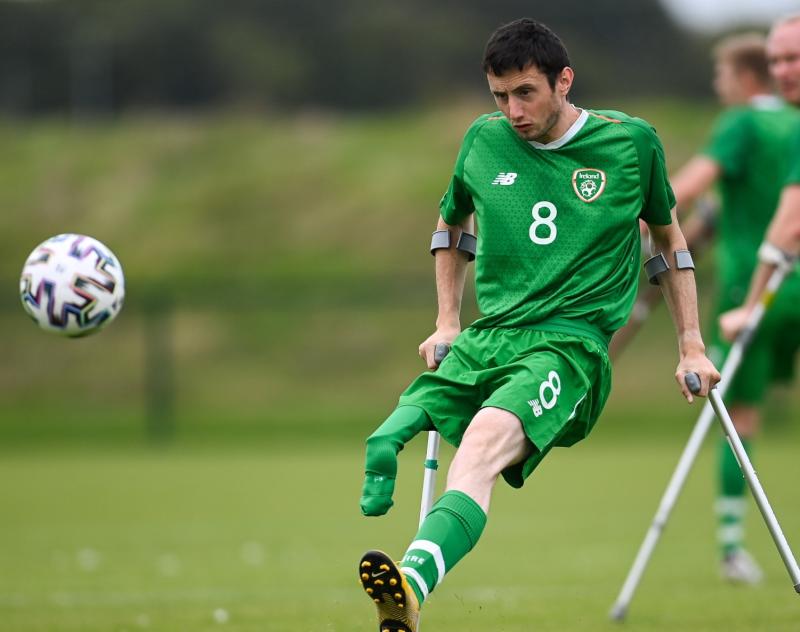 LIMERICK man Patrick Hickey is a key member of the Irish Amputee International soccer side which has reached the quarter-finals of the European Championships.

Pallasgreen man Patrick and his Irish team mates will face defending champions Turkey in their last eight fixture this Friday.

The game, which kicks-off at 1pm on Friday can be viewed via https://www.facebook.com/EuroAMP

Christy McElligott's side opened the EAFF European Championship campaign with a hugely impressive 8-0 victory over Belgium in Krakow.

Cork City frontman James Boyle grabbed a hat-trick with Ireland dominant throughout. The Donegal native's third was a stunning free-kick and contender for goal of the tournament.

Next up was a difficult outing against Germany who came into the game following a defeat to Russia. The fixture took place at noon on Tuesday with the German side keen to keep the potent Irish attackers at bay. Kevin O'Rourke bagged his second of the tournament early in the game to give Ireland a deserving lead.

The Boys in Green were pegged back as a result of a German free-kick before Boyle popped up to restore Ireland's lead just before the break. Ireland pushed for a third goal but were unable to penetrate a resolute defence with the game finishing 2-1 and Ireland securing a place in the quarter-finals.

Wednesday was a battle for top spot with Ireland facing the equally impressive Russians who recorded two wins frogrm their opening encounters with no goals conceded.

A tight affair saw Russia take the lead with a long-range effort after 21 minutes. McElligott's side were growing into the game but were dealt a blow conceding early in the second-half. The Irish side pressed but Russia weathered the storm to prevail 2-0.

The result on Wednesday leaves Ireland with a quarter-final against defending champions Turkey who topped Group D with maximum points.

The Boys in Green finished sixth at the inaugural EAFF European Championship in Istanbul in 2017, which was won by hosts Turkey.

Speaking ahead of the final eight game McElliggott remains confident of causing an upset against the top ranked Turks. "We have a great bunch of lads who are working extremely hard for their country in what are challenging conditions with 26-degree heat.

"The bond between the players is so strong and we remain positive as we face up against what is one of the world’s greatest teams, Turkey. We will give everything we have and will implement our game plan and see where it takes us"