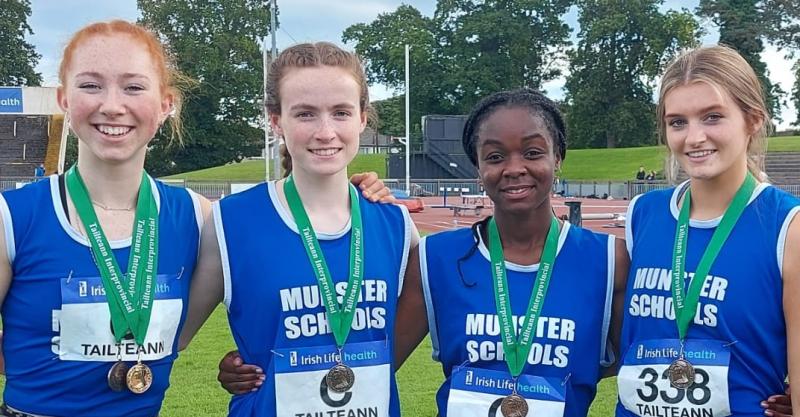 Having come through the Munster Trials the previous weekend some of the country’s best Juvenile athletes competed for their schools and province at the Morton Stadium in Santry. There was only one Age Category.

She was also 4th (10.62) in the Triple Jump. Eimear Galvin (Hazelwood College Dromcollogher) was 2nd in the 300mh.

In the 4x400m Relay, Eimear Galvin and Debbie Lawal were on the Munster team which finished 4th in 2:57.59.

Calum Keating (Hazelwood Dromcollougher) won the 5Kg Shot Putt in 15.80.
Geoffrey Joy O’Regan (St John the Baptist Hospital) again performed strongly to take the High Jump title (2:06) and was on the Munster Team which came 3rd in the 4x400m relay (3.36).

Parkrun
Parkrun returned to the Treaty County for the first time in 18 months and attracted 143 participants and volunteers to UL.

Well done to An Brú’s Mark Carmody who in a time of 1:55 came 6th in the 800m at the International Track Meet in Belfast.

Continues in Newcastle West and Mungret.