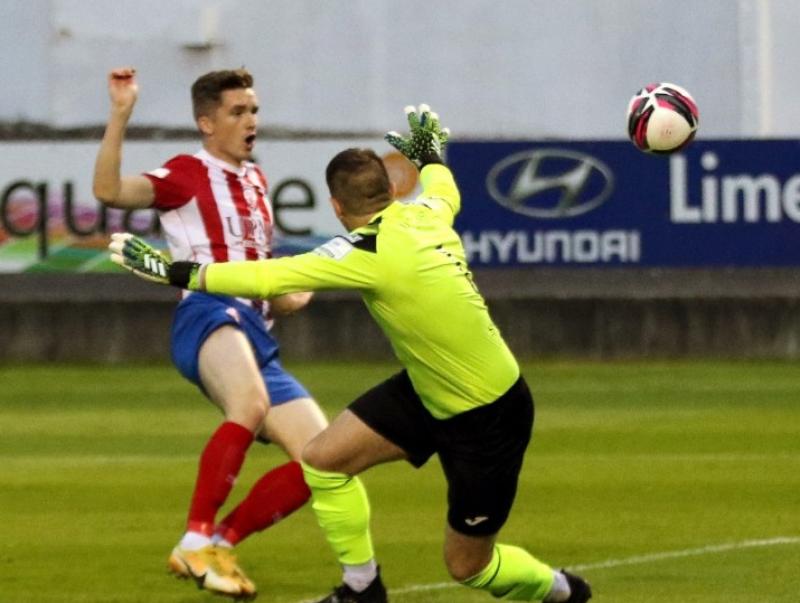 TREATY United boosted their promotion play-off hopes in the SSE Airtricity League First Division after securing a precious 3-0 victory over Cobh Ramblers in their Munster derby played at the Markets Field on Friday night.

A first half goal from top scorer Sean McSweeney and two second half efforts from ex-Cobh Ramblers player Anthony O'Donnell, his fourth of the campaign and a sublime volleyed effort from Willie Armshaw helped Treaty secure their first win in four league games in front of an attendance of up to 900.

This was a precious win for Tommy Barrett's charges who had taken just a single point from a possible nine in their three previous league fixtures.

While fourth-placed Treaty won the game comfortably in the end, visitors Cobh created a decent number of scoring chances in an incident-packed Munster derby.

Treaty will take a great deal of confidence from this win as the side had been showing signs of the pressure of being involved in the promotion play-off battle in their inaugural season in League of Ireland football.

The sides finishing down to fifth place in the First Division at the end of the regular season will be involved in the promotion play-off race.

There are now just six games remaining in the First Division season. Next up for Treaty United is a trip to Eamonn Deacy Park to take on fellow promotion play-off contenders Galway United on Friday night, 7.45pm.

Treaty United boss Barrett made three changes to his starting line-up from the side which drew with Wexford FC two weeks earlier as Charlie Fleming, Matt Keane and Clyde O'Connell came into the starting XI in place of Joel Coustrain, Callum McNamara and Kieran Hanlon.

Treaty recovered from an unconvincing opening couple of minutes as the home side took the lead after eight minutes.

Atracking full-back Marc Ludden created the opening with a terrific cross from the left wing and Sean McSweeney darted in to finish the ball past Cobh 'keeper Sean Barron.

The goal saw the West Limerick native become Treaty's top goalscorer in the league this season.

Treaty had survived a scare as early as the second minute when Conor Drinan robbed a home defender before marauding goalwards. However, his attempted centre flash across the goal.

A quiet 15 minutes followed the goal before Treaty came oh so close to doubling their advantage on the half hour maerk.

Stephen Christopher's free-kick on the left was headed goalwards by McSweeney. However, the attempt on goal collided with an upright before hitting Cobh 'keeper Barron on the back.

Jack Lynch's follow-up attempt was then blocked on the line by Ramblers' defender Charlie Lyons, before the danger was eventually cleared.

The home side deservedly maintained their advantage until half-time.

Treaty came close to adding to their 1-0 advantage 10 minutes into the second half, but Jack Lynch's glancing header from Ludden's right wing cross flashed just outside the left hand upright.

To their credit, Cobh remained a threat at the other end and when Edward McCarthy lost possession, Conor Drinan flashed a well struck shot just wide.

Drinan came even closing to equalising for the visitors a few minutes later when played through by Dave O'Leary. However, the striker's effort on goal came crashing back off the upright, before being cleared.

The see-saw nature of the game continued as the third quarter wore on. Treaty came within a whisker of doubling their advantage in the 63rd minute, but Anthony O'Donnell's close range header from Marc Ludden's corner came crashing back off the crossbar.

O'Donnell was not to be denied, however. When Cobh failed to clear a Treaty United corner on 72 minutes, the ball came out to captain Jack Lynch who flashed a dangerous ball back across the box and the alert O'Donnell fired the ball home from inside the six-yard box.

Substitute Armshaw then added a sublime third goal on 78 minutes, volleying home superbly at the back post from Matt Keane's cross. The goal brought the Markets Field crowd to its feet.

It was a strike good enough to win a game in its own right.

*A minute's applause was observed before kick-off as a mark of respect to former Limerick FC defender Samuel Oji who passed away aged just 35 due to illness last weekend. Oji played for Limerick in the 2013 and 2014 seasons.