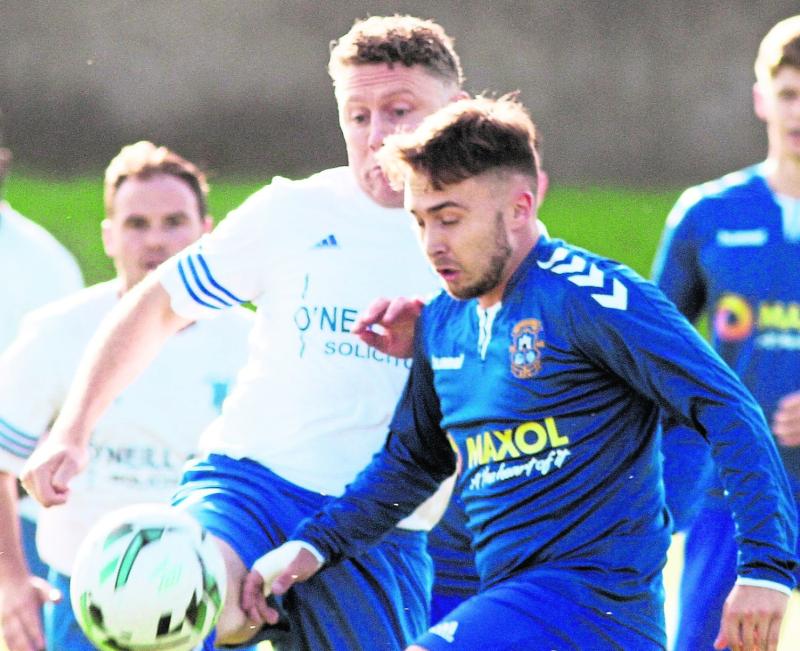 THE final round of midweek Premier League games are scheduled for this Thursday, September 2, with the pick of the bunch being joint leaders Aisling Annacotty home tie versus Mungret Regional.

Mungret gave Pike a real battle last weekend before succumbing to a late Colm Walsh O’Loughlan goal. They are a young pacey side and are capable of causing an upset.

Aisling, tied with Pike at the top of the table will be aware of the difficulty Pike experienced last weekend, which may take away the surprise factor. Shane O’Hanlon’s men are scoring freely and look to be improving with each game, so will be expected to prevail.

Pike Rovers, also on 100% record to date will also carry the favourites tag at home to Coonagh Utd but the Hoops are savvy enough not to take anything for granted. Coonagh drew with Regional last weekend, denied a win by a last minute equaliser. They also pushed Fairview very close before going down 2-1.

Robbie Williams has been using his large squad to good effect to date and it seems to be bringing the best out of the players. With the arrival of MFA and FAI fixtures in the next few weeks, he will be keen to bed down his strongest XI which should keep the team focused for Sunday’s game.

Kilmallock picked up their point last Sunday in a draw with Nenagh but will find Fairview Rgs a different proposal on Sunday. Nenagh welcome a Ballynanty Rvs side determined to get back into the title race after a couple of defeats.

Janesboro welcome Regional Utd while Prospect Priory and Geraldines meet in a game vital to both sides hopes of survival.

The Munster Junior Cup kicks off at the weekend when holders Aisling Annacotty begin their bid to retain the trophy with a visit to lowly Athlunkard Villa C. Villa's Bees drew another Premier side, Regional Utd, in their opener.

Nenagh AFC A v Moyross Utd could be the game of the round. Nenagh started the season well but have stuttered slightly since. Moyross have an impressive squad with the vast majority experienced in the top flight.

Frank Hogan’s men have been in good form but for a surprise home defeat to Murroe. They bounced back well last weekend to get back to winning ways. They could cause Nenagh problems.

The only all Premier game pits Kilmallock and Janesboro at the county venue in a game that will be a nice break from League action for both sides.

Another side that will glad to take a break from Premier survival pressures are Geraldines. They are still waiting for their first win and they hope they may get off the mark when they host Croom Utd.

A preliminary game at Corbally sees the hosts welcome Fairview Rangers A in what may prove an entertaining affair. Corbally have been playing well but they will be well aware of the step up required when the FAI Champions come to call.

Mungret Regional will be expected to ease past Nenagh AFC B as will Coonagh Utd when they host Shelbourne, although the latter being a local derby might make it a little tougher.

Division 1A side Patrickswell host Ballynanty Rovers more in hope than confidence while Prospect Priory FC v Caledonians FC evokes memories of some great local derbies over the years.