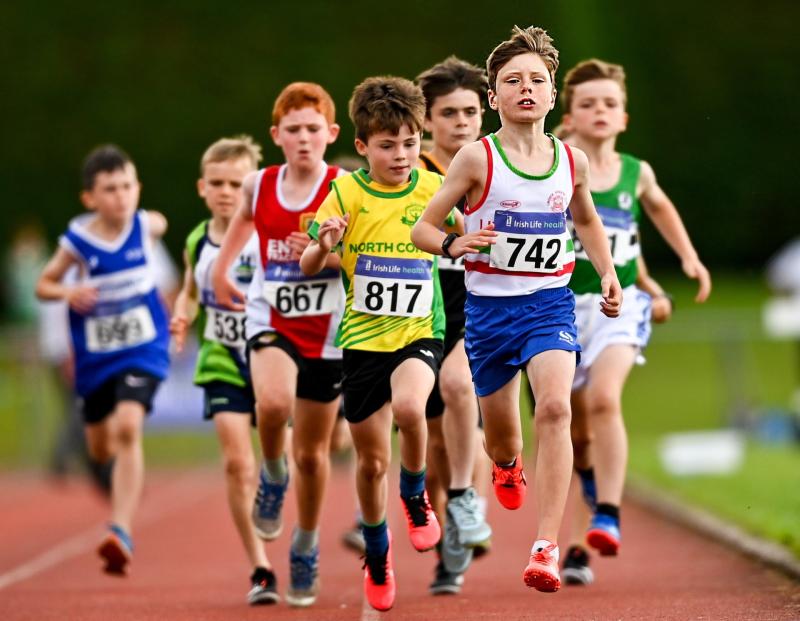 Kilian Coman, 742, of Limerick AC, competing in the Boy's U10 500m at the Irish Life Health Children’s Games in Tullamore

THE final day of the Juvenile Track and Field Championships took place in Tullamore, Co Offaly last weekend.
Athletes qualified through the Munster Championships and this was another opportunity for competitive action on a national level for Limerick’s young athletes. Many performed well and many brought home medals.

At U13 Destiny Lawal (Dooneen) took Gold in the 80m sprint (10.59) with Megan O’Shea (also Dooneen) 7th in 11.16. Megan O’Shea took Silver in 60mh in 9.88 with Dooneen clubmate Lilly McMahon third in 9.91 Both girls had won their respective heats.
Pentathlon: Alan Gladysz (Limerick) was 6th in the U16 Pentathlon Great day for Dooneen AC.

These have been a successful Championships for Limerick with some athletes competing on a national level for the first time.
Well done to all athletes, parents, coaches and all volunteers.

Churchtown AC 5 Mile
A LARGE cohort of athletes from Limerick made their way to Mallow for this Churchtown Roadrunners AC hosted event.

It was a challenging course, with a lot hills in miles 2 and 3 and started in two waves but the rain stayed off and there was good performances.
The best of which was by An Brú’s Niall O’Riordan who took a superb second place in 27:31 behind the race winner Tony Harty (27:06).

In the women’s contest there was another strong performance from Bilboa’s Julie McCarthy who was 7th in 33:24 with the race being won by Orla Byrne in 31:44. Others from Limerick who took part included Henry Downes (38:58) Fiona Murphy and Alex Kelly from the Country Club AC Everyone was happy to be running again and well done to the organisers.

Around the Country and Abroad

John Kinsella had another victory on Polish soil winning the ‘5th run of Squadron 7 mile’ in Stary Wies Poland in a time of 37:23.

He followed that the next day by winning the 5th Wisznicka Trail race in Wisznice. Well done John.