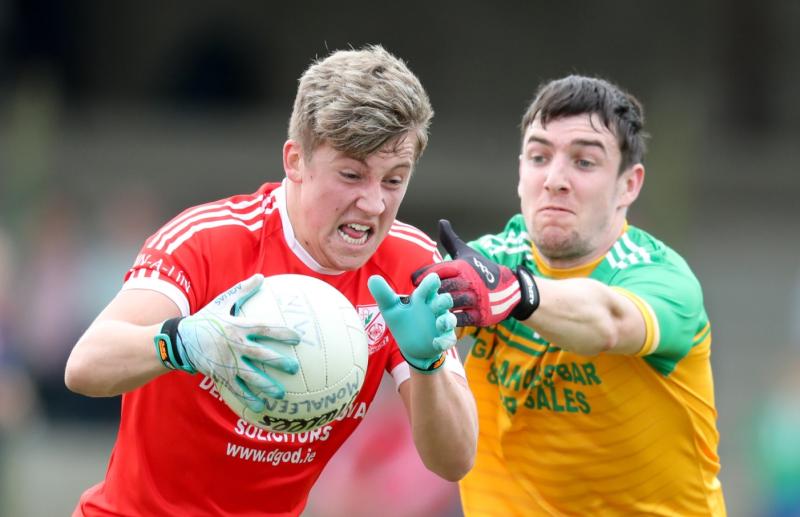 Monaleen's Sam Burns on the charge in their Limerick Co SFC game with Ballylanders in Bruff on Saturday Picture: Keith Wiseman

AMBUSHED by their opponents in last year's quarter-final, Monaleen made no mistake when dumping Ballylanders out of the county senior football championship with a clinical 2-12 to 0-5 victory in Bruff on Saturday afternoon.

Throttling the life out of Bally's challenge in the opening quarter, the winners were never under serious pressure over the hour and finished off the game as a contest with a one-two goal blitz coming up to the second quarter.

Although they were on the back foot right from the start, Bally' never gave up the ghost and kept the contest honest whenever their opponents' squeeze eased up but, try as they might, they just couldn't get over Monaleen's physical advantage in too many positions.

Monaleen now face Claughaun in their final group fixture, with both sides having already qualified for the knock-out phase of the championship.

On this performance, Monaleen have the ammunition in the backs, midfield and up front and, if they their intimidating periods of dominance can be extended in the meantime, they'll be a handful for any opposition that faces them.

Donnacha Ó Dálaigh had Monaleen off the mark inside a minute and their dominant midfield allowed them to maintain a high press as Ross Kennedy and Mark O'Dwyer increased their lead to 0-3 without reply by the first water break.

Monaleen's lead was 0-7 to 0-2 by half-time. The City team used the breeze to good effect on the restart for Brian Donovan to stretch the gap before O'Callaghan replied off a free.

But then Bally's roof fell in when O'Dwyer collected off Donovan to blast low into the corner, Sam Burns followed up within a minute by crashing home from a tight angle. Game over.