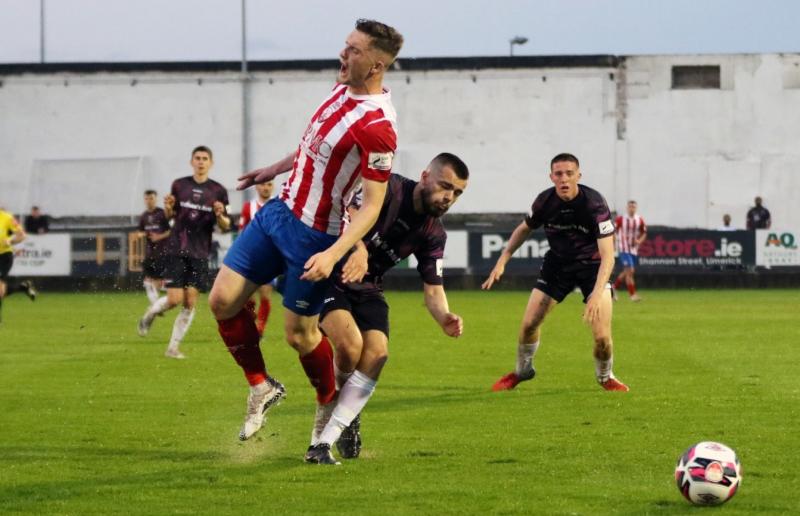 GRITTY Treaty United rescued a precious point in their bid to secure a SSE Airtricity League First Division play-off place in a dramatic 1-1 draw with basement side Wexford FC at the Markets Field on Friday night.

And against the odds goalscorer McSweeney might well have won it for Treaty in stoppage time, only for his header to come crashing back off an upright.

It could prove a crucial point for Tommy Barrett's side who had lost their two previous league fixtures against Cabinteely and Bray Wanderers.

Visitors Wexford, who had recorded just their second league win of the season seven days earlier, had deservedly led their hosts 1-0 until the closing stages thanks to Kyle Robinson's goal on the hour mark.

Indeed, Wexford will feel a degree of frustration at their inability to add to that one goal advantage as the visitors created several good goal scoring chances, but were denied by some top class goalkeeping by Treaty keeper Tadhg Ryan.

Treaty United, who were so impressive through the opening two thirds of the season, have been finding the going more difficult of late. However, they will be delighted to have fought back bravely to secure a point in front of their home supporters.

Treaty do not have a game next Friday evening as the second round of the FAI Cup again takes centre stage. Tommy Barrett's charges resume their league programme with a home game against Cobh Ramblers at the Markets Field on Friday, September 3 at 7.45pm.

The kick-off time for the game was delayed for 15 minutes after the pitch at the Markets Field had to pass a pitch inspection before the green light was given for the fixture.

Persistent rain throughout the day and a heavy shower less than an hour before kick-off left some standing patches of water on the pitch. However, remedial work on the pitch using brushes and forks succeeded in draining the water sufficiently to allow the fixture go ahead.

When the game finally got underway, Treaty United survived a double scare in the seventh minute as visitors Wexford came within a whisker of opening the scoring.

Firstly, from point blank range, Wexford's Harry Groome forced a terrific reflex save from Tadhg Ryan who stood up big and strong in the goal. The wet ball squired free, but Jack Moylan's follow-up effort hit the post.

That let-off appeared to spur Treaty into action and Kieran Hanlon's well struck ninth minute effort was only parried by Wexford 'keeper Jimmy Corcoran before the danger was cleared.

Hanlon flashed another effort just outside the right hand upright in the 17th minute following good play down the left by Stephen Christopher.

Treaty had a let off just after the half hour mark when Karl Fitzsimons cross from the right from fired to the net by Kyle Robinson. However, a linesman's flag came to Treaty's rescue as Robinson was deemed to have been off-side.

The game remained scoreless at half-time despite the decent number of chances created.

It was visitors Wexford who eventually hit the front just before the hour mark through Kyle Robinson from Jack Moylan's pass.

Treaty introduced Willie Armshaw and Conor Melody off the substitutes' bench just after the hour mark in a bid to get back into the game.

However, it was Wexford who created the next clear cut chance. However, Robinson's shot cracked off the post, and the follow up from Fitzsimons was saved by Treaty 'keeper Ryan.

Moylan then came close to adding to Wexford's tally as Ryan was forced to produce a top drawer save.

Treaty needed to find inspiration from somewhere and it so nearly arrived in the 78th minute when substitute Willie Armshaw turned the Wexford defence inside out before his effort on goal smacked against the upright before sliding away to safety.

Armshaw then turned provider for the home side's equaliser when the lively McSweneey headed the ball home on the 85th minute.

The sides down to fifth place in the First Division will be involved in the promotion play-offs at the end of the regular season. There are now just eight fixtures to go in that regular season.