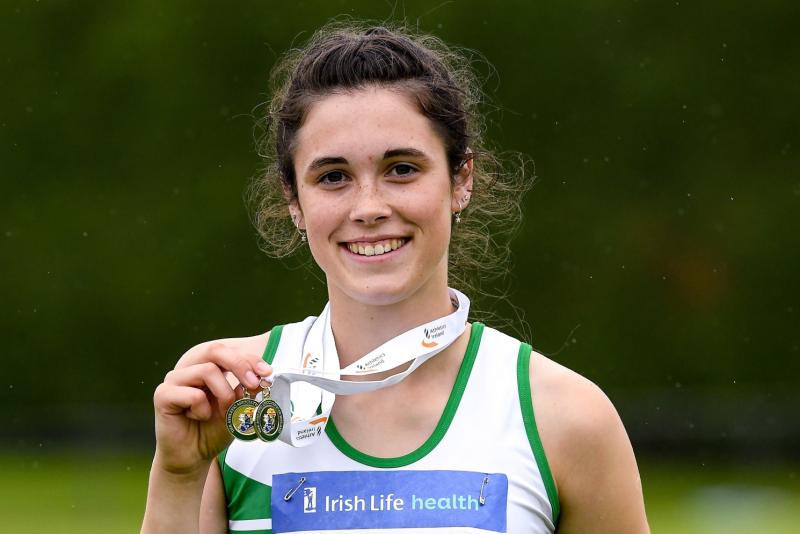 Laura Frawley, Emerald AC, who won gold in the girls U-18 Long Jump and High Jump at the National Juvenile T&F Championships

WIND and rain didn’t stop several Limerick athletes from producing great performances at the fourth and final day of the National Juvenile Track and Field Championships in Tullamore last Saturday.

At U16 Leagh Moloney (Emerald) took Silver in both the Triple Jump (10.25) and also in the Long Jump (5.44) having been the early leader in a tight contest.

Her first jump of 5.92m was her best of the day and secured the gold from Katie Nolke (Ferrybank A.C.) 5.88 who took the silver medal. She also won the High Jump with a clearance of 1.65m.

AROUND THE COUNTRY AND ABROAD

John Kinsella won the Tropem Wilczem 10K in Lubartow Poland in a time of 16:09. Rob Stephen (Sanctuary Runners) completed the Bath Half marathon in England, organised in waves, in a time of 1:52.

Congratulations to Sean Quirke who finished 2nd at Galtymore and won the Munster Mountain Hill Running Championship for the 4th time.

The Moreabbey Milers 10 mile takes place in Galbally on August 29 at 11am.