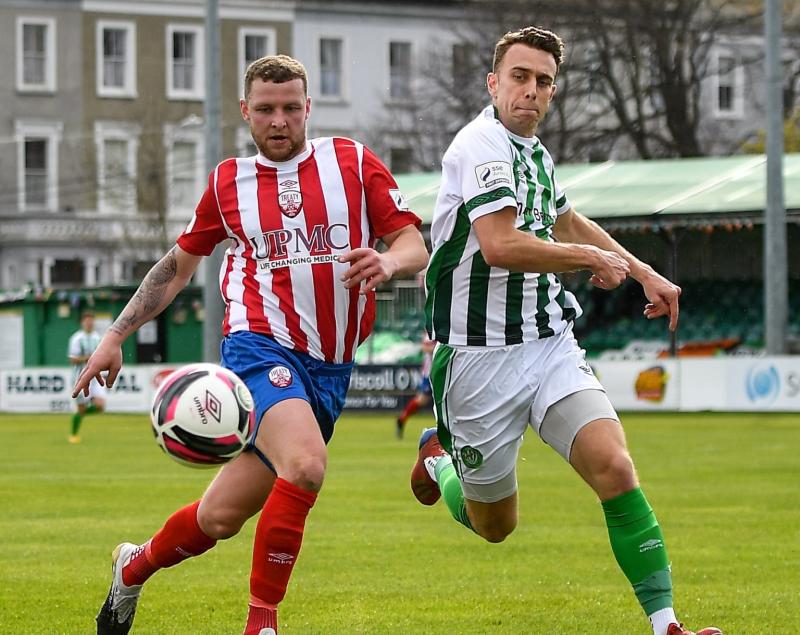 Treaty United's Anthony O'Donnell in action with Darren Cravan, of Bray Wanderers, at the Carlisle Grounds in March

SMARTING Treaty United must regroup quickly from their disappointing home defeat by Cabinteely as they face a crucial SSE Airtricity League First Division fixture with Bray Wanderers at the Carlisle Grounds this Friday evening, 7.30pm.

Treaty United dropped to third place in the table as a result of their 4-1 reverse to Cabo last time out', while Friday's opponents Bray sit just one place and three points below them in fourth place in the table.

The sides finishing down to fifth place in the First Division table at the end of regular season will be involved in the promotion play-offs. There is now just nine games to go in the regular season.

Treaty Utd manager Tommy Barrett said: “We will get back to the basics this week and hopefully we can get a result in Bray. But it is going to be really difficult.

“We are going up to Bray and they are on a good run. They beat Wexford on Friday night.
I think I'm right in saying that the only side they lost to in the second series of games was Shels', they have won or drawn every other game.

“They are a really tough outfit. It will be a difficult task for us.

“Our lads have probably had two bad games against Cabinteely out of 18 matches and even at that I don't think we were too bad tonight.

“We played some good football but things just didn't go our way. We have only lost four games so far this season in the league.

“It was by the biggest margin all right, but again there are lots of positives to take, we'll move on.”

Tonight's game between Treaty Utd and Bray Wanderers is available to view on the LOI TV Stream.