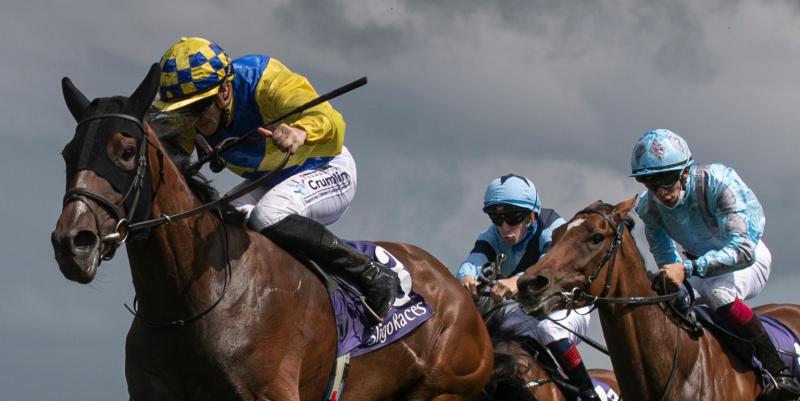 PATRICKSWELL trainer Michael Hourigan landed the mares’ beginners’ chase at Roscommon with a horse whose name contains the initials of seven of his grandchildren.

Icee M B A came from off the pace under Brian Hayes to win by a length and a half from the John Ryan-trained That’s Lifebouy at odds of 12/1.

Hourigan said, “I bought two fillies at the sales the same day for peanuts and I said I’d give them to the grandchildren. She’s named after the seven grandchildren I had at the time, that’s the initials of them all. I’d like to be at home now to hear them roaring at the television!”

Amateur rider Aine O'Connor rode the final winner of the evening at Tipperary on Thursday when taking the ladies’ handicap on the Ray Hackett-trained Sequoiaspirit.

The 4/1 chance completed a hat-trick of wins with a two and a half-length success over the Gavin Cromwell-trained 7/2 favourite Call Me Dolly and Hackett said, “I thought Áine gave him a smashing ride, she had him in the right position and it worked out lovely.

"I was a bit worried about the ground until I walked it this morning and I thought we’d be okay. For us in the jumping game that’s gorgeous ground. We might go to Listowel and if not we might hold him for another race in this series at Naas. Today was the plan and it’s nice to get that over the line.”

Ballingarry's Philip Byrnes is to turn professional on the back of his success on the Martin White-owned Wonder Laish at Kilbeggan on Saturday evening.

Riding for his brother Cathal, Philip booted home his 13th winner as an amateur rider when recording a one-length success on the 4/6 favourite in the two-mile conditions’ hurdle. The winning trainer said, “That’s Philip’s first winner over hurdles and he turns conditional on Monday. It’s great that the owner gave him the opportunity.”

Paddy Twomey has a number of big plans for La Petite Coco which ran away with the Group 3 Irish Stallion Farms EBF Give Thanks Stakes under Billy Lee at Cork on Saturday. The 2/1 favourite raced clear over a furlong from the finish to beat the Ger Lyons-trained Thunder Kiss by all of five and a half-lengths.

Twomey said, “She is progressing physically and is enjoying training and has plenty of talent. She has plenty of entries and I said after Killarney that the EP Taylor is a possible target, but I have her in the Champion Fillies & Mares race in Ascot in October and the Prix Vermeille as well.”

Lee took the concluding six-furlong handicap at the Curragh on Sunday afternoon with Texas Rock in the Joe Keeling colours. The Michael Grassick-trained 20/1 chance denied Johnny Feane a double when holding off Dragons Call and Chris Hayes by a head.

Newmarket-On-Fergus trainer Aengus King was among the winners at Roscommon on Tuesday where the Mark McDonagh-ridden Fill The Tank landed the near-three-mile handicap hurdle.

In the trainer’s own colours, the seven-year-old went to the front after the final hurdle and scored a comfortable one and three-parts of a length success over the Philip Rothwell-trained Siberian Star. King said of his 11/1 winner, “The ground was the key.

"When he ran in Tipperary, they were calling it yielding but they over watered it. For the size of him you’d think he would like heavy ground but he seems to perform on this kind of (good to yielding) ground.

"He’ll go back over fences next time. Once we get him going and get him fit we don’t do too much at home after that.” It was a fourth winner of the season for Cratloe’s Mark McDonagh and his ninth success in all.